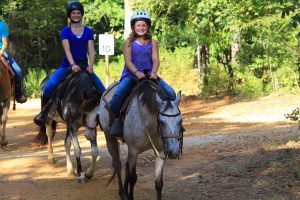 Have you ever been on a Frontier Camp trail ride? What do you look for in the horse you pick? The one with the prettiest coat? The one who looks the calmest? Or maybe you’re the adventurous type who goes for the horse with a little bit of spunk?

No matter how you pick, there’s one thing that all good camp trail horses have in common: they know how to follow.

Once we get the horses lined up and start moving down the trail, they settle into a slow, plodding pace, nose to tail, one after another, almost like they’ve switched into autopilot mode. Wherever the lead horse goes, that’s where the rest of the trail is going too. And that’s a good thing.

Problems arise whenever one of the horses decides to take matters into his own hands (or hooves) and strike out on his own. The horses behind are so used to following, that they don’t always realize that they’ve left the path somewhere along the way and are no longer on the heels of the lead horse. Instead, they’ve been “tricked” into following the wrong leader.

The same thing can be true about us in life.

Just like the trail horses are supposed to walk in the hoof-prints of the lead horse, we’re meant to walk in Jesus’s steps. To do the things He did. To follow where He leads.

But that can be difficult when the people around us decide to strike out on their own and make their own paths through the woods. It’s easy to go with the flow. But standing firm and making the decision to follow Jesus instead of the crowd—especially when it’s a crowd of our friends—well, that’s a lot tougher. So here are some things to think about as we try to follow the Lord.

Just because “everyone else is doing it,” doesn’t mean it’s the right thing. Go back to Scripture. Ask yourself if you would be comfortable doing what you’re doing or saying what you’re saying if you were standing next to Jesus. Because—in a way—you are. Nothing you do, say, or think is hidden from Him.

Christ is our ultimate leader, but there are a lot of people that we allow to lead or influence us each and every day. Think through who those people are in your life. They could be friends, family, coworkers. Are they leading you after Christ or trying to steer you away from Him?

If the trail horses fixed their eyes on the lead horse, instead of simply watching and following the horse directly in front of them, they would be a lot less likely to get drawn off path. The same is true for us when we “fix our eyes” on Jesus. When we’re focused on following Christ, we won’t lose sight of what He has done for us or who He wants us to become in him. We won’t be distracted by every new and exciting thing that comes our way. We won’t care so much that we’re not following the “in” crowd, because we’re following Him … and that is enough.

One of my favorite verses, Hebrews 12:2, clearly talks about this concept. It says “Let us fix our eyes on Jesus, the author and perfecter of our faith, who for the joy set before Him endured the cross, scorning its shame, and sat down at the right hand of the throne of God.”

Fixing our eyes on Him is a decision we have to make daily. So what will you choose today? To follow the herd off path or fix your eyes on Jesus?