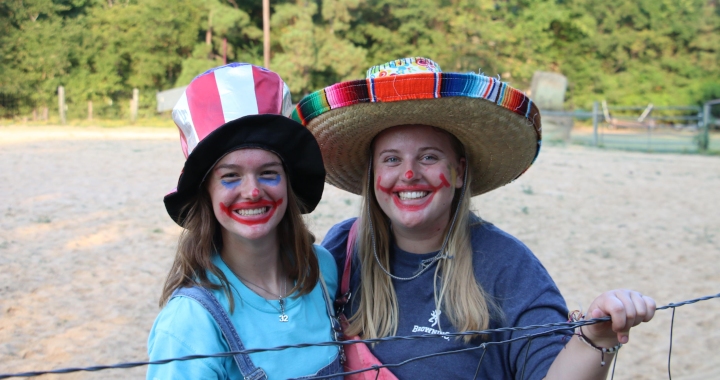 “Faith, Fun, Friends, and Food” written by guest blogger, Kate Humes…today’s installment is all about FUN!

One of the first questions a parent asks after picking up their child from camp is, “Did you have fun?”

Fun: a word that connotes much and denotes little. Its interpretation is entirely dependent upon its application to any given scenario or situation. Saying, “It was fun to fix the car” and then saying, “It was fun to take a 2-week vacation” have two entirely different perceptions of the overall idea of fun. How does one describe a water weenie? How to describe why campers are addicted to the adrenaline rush of falling off and getting right back on? It is tricky to objectively assess fun, but it is a central component to the successful formula of Frontier Camp.

Campers and staff have two very different experiences when it comes to the summer, but also when it comes to fun. The staff not only looks after the campers, but also facilitates activities that are part of the fun. FC staffers make sure all the campers are having the time of their lives (safely, of course!). And when the campers are having fun, it usually means the staffers are taking part in the merry making, too.

Boy, can FC really pack a punch full of fun: arrow tag, water sports, zip line and ropes course, rodeo, fossil hunt, night games, shaving cream slide, T.P, (camp lingo for “Trading Post” or snack shop) trail rides, Bible drama, field games—and that’s not even half the list. FC is always adding to the fun; recently a pipe slide was added at Junior camp. It is an exciting adventure riding atop a sled-like contraption speeding down culvert pipes, hopefully to stop at the bottom. So far, no one has sped into the woods!

The fun is catered to different age groups, with certain activities at Teen camp (Fossil Creek) geared toward older campers, such as the cable lake and night games, as well as more time to chill. At Junior camp, kids enjoy a pool and slide, hay rides, and inventive, slapstick Bible dramas.

“Camp is for the campers,” the full-time directors never fail to remind the staff. The intent behind this pithy phrase is not to shame the staff out of having fun. But rather it is to reinforce the idea that the staff are there to maximize camper fun when possible. Plus it taps into the service aspect of being a staffer. There are a few things, such as homesickness or a sunburn that can impact the experience of a camper. The staffers help each child feel safe while at camp and return home with positive and exciting memories of their week at camp.

But fun isn’t always easy, and it isn’t always, well . . . fun. The staff  has a tough job, working long, hard days. Sometimes teaching a timid seven-year old how to waterski or play capture the bacon in 95 degree heat isn’t exactly the idea of a cool summer vacation. Staffers are troopers, though, and they push through the hard things in order to serve the campers. They smile and keep going. They realize it is just as important to keep the fun in Week 8 as it is in Week 1.

Don’t be left with the impression that the staff sacrifice their fun for the sake of the campers, or that all summer staff are putting on a show of having fun. Actually is is quite the opposite.  Even though they can be tired and emotionally drained, they are genuinely having a good time with the campers. As much fun as the campers have, the staff often have it in equal measure. Though the appeal of wearing over-sized overalls and a colorful wig during rodeo is not much, being a rodeo clown is quite a jolly venture, since the campers love the clowns—and their enthusiasm is contagious.

Sometimes the most fun a staffer has is in seeing his/her campers succeed at something or getting excited at their favorite activity or weekly event. There is almost a parental pride in watching a kid get up on water-skis after a week of coaching and encouraging. Watching the smallest child eliminate 15 other opponents in a round of pitball is rewarding for anyone watching. And, watching that Wiffle ball soar into the sound booth with a camper circling the bases is as good as it gets.

There is so much fun to be had through skits and, of course, the daily Bible drama. Staffers  have taken part in these escapades for what seems like forever. Talking in silly voices, dressing up in wild costumes and making the kids giggle. The campers, too, watch the staff enjoy acting out Bible stories, which gets them excited about the Bible. There is also a bit of banter that comes along with being in Bible drama, as the campers like to approach staffers and try to guess if they are King David or Jonah or whatever the Bible story is that summer. The staffer playfully denies ever taking part in the dramas.

Morning Mystery Prophet installments have a similar, if not stronger, appeal to camper imaginations. The traditional high-pitched voice, accompanying bearded face masks and faded clothing produces uproarious laughter from campers. And the staffers love seeing kids attempting to pin a staffer as one of the Mystery Prophets.

What about fun for parents after they’ve had to pay for camp? Parents also get to have a vicarious experience of the fun during the car-ride home, listening to all the things their kids did during the week and watching those daily videos.

FC can even have fun when it comes to plan B. In spite of rainy weather, equipment malfunction, or a stomach bug, Frontier Camp approaches with a positive attitude and unchallenged flexibility. The staff is taught—both theoretically and in practice—the value of flexibility, and how to have fun when plans don’t go according to plan. The entire camp being stuck under the lake pavilion during a thunderstorm is the opportunity for an impromptu sing-along session. A stay in the infirmary can be a chance to complete a friendship bracelet. The fun goes on even when a curve ball shows up.

For a small camp in East Texas, FC knows how to facilitate fun.  They make learning about faith fun with Mystery Prophets, Bible drama, sword (Bible) drills, and Dudley’s campfire appearances. Camp is hardly fun without friends to join in games, activities, mealtimes, and cabin time. Even food is fun at FC, with themed banquet meals, rodeo concoctions, and cookouts complete with fire-building, roasted hot dogs, and s’mores. Camp knows the effect of having a good time is key to relationship building, which is key to reaching kids with the gospel.

Whatever it takes, fun is vital to the experience and idea of Frontier Camp. Fun is usually the initial selling-point to staff and campers alike, but fun is, of course, not the end-all. What sets FC apart from other camps or camp experiences? It’s that it is a pro at integrating faith and friends into daily activities. Come out to FC for the fun, get persuaded to stay by the food and friendships, and leave with a stronger and more realized faith.