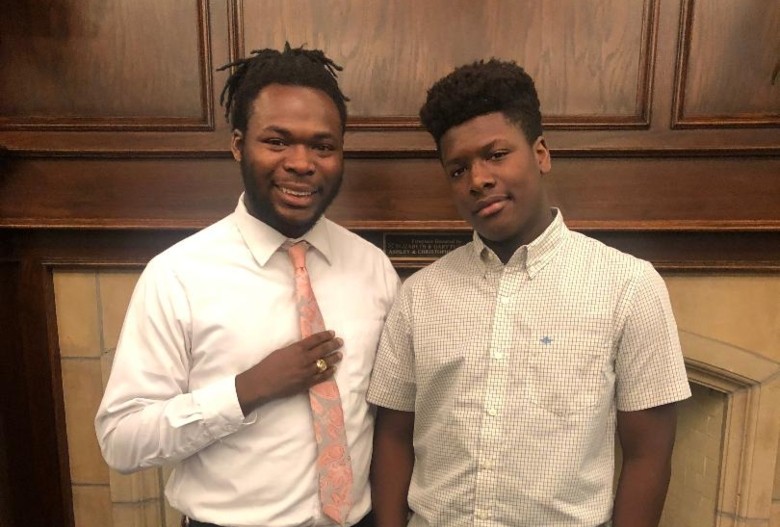 By Matt RainesAugust 9, 2019No Comments

Many kids in the Angel Tree program can’t afford to go on vacation, see a concert or go to camp. Most come from single-parent homes. Children of inmates also are six times more likely to serve time behind bars than a child who does not have an incarcerated parent.  The Angel Tree Camping program seeks to break that cycle!  They enlist churches to partner with Prison Fellowship to send kids to a free week of camp.

Zackarie Henry was one of those kids. When Frontier Camp partnered with Prison Fellowship’s Angel Tree Camping program over 15 years ago, Zackarie was one of the first to sign up.

“Being able to go to Frontier Camp year after year and meet new friends from a similar background as me and people that didn’t have the same background but never judged me or my peers brought a home-like feeling to me,” Zackarie said. “To make it better I was able to do these cool things during that week I was there – things that my friends were doing all summer long. So every summer I would wait until August so I could go back just to feel that feeling of freedom.”

Some campers shy away from trying new things. Not Zackarie.

“The Angel Tree program allowed me to go to this wonderful camp and explore a whole new world I never knew about,” he said. “Frontier Camp changed my life. It is good if Christians go to church every Sunday, but it’s much more than that. Once I realized that, my friend group slowly started to change. My close friends that I would consider my brothers are the same friends that help keep me on the right path every day.”

He watched the male role models at camp – men like Matt Raines, Matt Henderson and Lee Bertram. Zackarie said he saw camp as a way to a better lifestyle for himself and his family.

“The best way to learn this lifestyle is to make sure I walk the straight and narrow like these fine gentlemen are doing,” he said of the camp leaders. “Watching these men for years, I have never seen any flaws from them. I saw how they lead their families as the man of the house and still had the energy and time to be a father figure for me and my peers. I was speechless; they taught me that things might not go according to my plan.  But they will always go according to God’s plan. To this day I have stuck by their teaching.”

Zackarie’s plan to stay out of trouble appears to have worked. The young man is set to graduate from Texas Tech University in August.  He will then return home to Houston to study for the LSAT and attend the University of Houston Law School.

His path toward success, Zackarie said, began at Frontier Camp. He won the Bravery Award, Bible Verse pins and the coveted “King of the Cheese.”

“There is a big yellow thing floating [in the lake] that looks like a cheese circle,” he explained. “Kids would throw each other off.  So basically whoever stayed on the cheese longest without being thrown off was King of the Cheese for that day.”

Over the years, Zackarie returned to Frontier Camp every August for the best week of his life. The experiences he gained include his counselor inspiring him to keep trying during a frustrating wakeboarding class. On one occasion, Zackarie and his peers were visited by “the Bible Answer Man,” who “made a little boy who has only known to doubt everything in life change to feeling optimistic.”

His favorite memory, though, is when a Christian rapper named Truevine came to his cabin and shared his testimony.

“It was so inspiring to a young kid like me,” Zackarie said. “It showed me that if he could make it in life and become successful, I could do it too because God is on my side even when the cards are stacked against me.”

Zackarie took those lessons with him as he began his college career in Lubbock four years ago. It wasn’t always an easy path. He was hospitalized in March with stomach ulcers and blood clots in his lungs.

“I was in and out of the emergency room for two weeks before finally getting admitted to the hospital,” he said. “They couldn’t figure out what caused it, but I have learned over time that God sometimes has to help us readjust our paths to make sure we are following the plan He has designed for us. I’m better now but I have learned that I should never fall back into doubt.”

Zackarie’s faith remains strong as he plans to begin a new chapter in his life. He selected Joshua 1:9 as a verse that he said “has gotten me through some dark times and has helped me lead some people to the light.”

“Have I not commanded you? Be strong and courageous. Do not be afraid; do not be discouraged, for the Lord your God will be with you wherever you go.”

(pictured below is Zackarie with his brother, Kaleb)