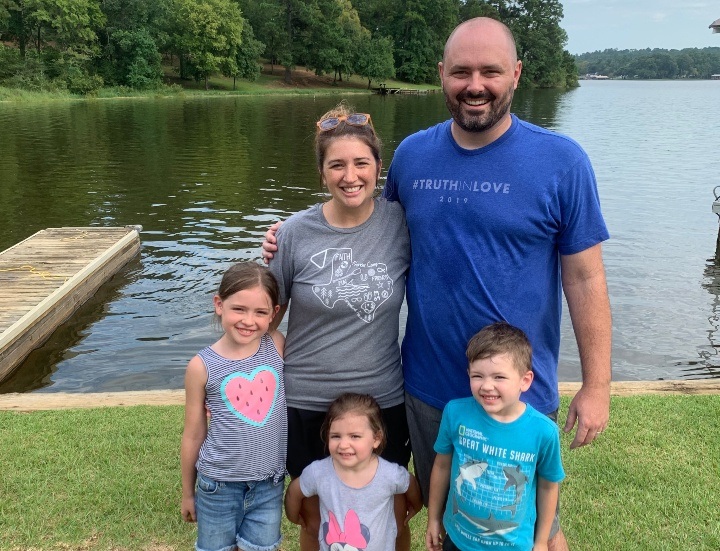 By Matt RainesAugust 16, 2019No Comments

I met with Stuart Sanders in his office at Tomball Bible Church where he is the senior pastor. He has books lining the wall by the door. An ancient Hebrew textbook sat on the desk, propped by a large book stand. He welcomed me with a smile and asked how I was.  We talked about life for a bit and Frontier Camp’s 50th anniversary. That led to a short interjection about how I was only eleven at the 40th anniversary weekend. After a few more laughs and polite exchanges, I sat on the black sofa in his office and Stuart in a chair facing me. I asked if it was okay if I recorded the conversation.  I didn’t want to have to furiously type the entire time. I promised I wouldn’t write anything embarrassing. He chuckled and then agreed.

Stuart is approachable and friendly, and even his office exhibits these characteristics. He is a learner—hence the Hebrew textbook—but he is clearly a teacher also. As he spoke and answered my questions, I noticed that he always downplayed himself.  He constantly referred to the people who were crucial to his spiritual growth. The common theme I noticed running throughout his answers was his desire to learn from those more spiritually mature than him and then to pass that learning onto others. This beautiful cycle is discipleship.  And it is something that Frontier Camp emphasizes during leadership training, during staff week, and throughout the year.

Discipleship is a key element in any form of pastoral ministry. A pastor is a shepherd to his congregation in the same way that Jesus is a shepherd to His sheep, to all those who have chosen to follow Him. A pastor is the picture of Jesus on earth. Now don’t get me wrong! I’m not arguing that pastors are somehow more godly because they are in a position that reflects the role of Jesus. But Jesus had twelve men that He called to follow Him; men better known to us as the disciples. They are disciples because they followed the teachings of Jesus and learned from Him. Pastors lead their church, and the people learn from them.

Stuart worked at Frontier Camp in a number of roles—some now extinct. He started as junior counselor at the age of fifteen (no longer allowed, for those of you who think you were shorted a year on staff). He was program director the year camp formed the program team. From the time he was on summer staff at Frontier Camp, he stood out as a leader.  He was in positions where he was able to be both discipled and to disciple. Little did he know that from day one as a camper, the Lord was preparing him to be in a position of church leadership where discipleship was so important.

The summer at FC Stuart remembers as being the most impactful was his first summer on staff when he was fifteen. He recalls seeing all the older guys on staff disciple each other and the younger staff. As a high-schooler who greatly admired the college guys, Stuart wanted to become like them. He wanted to imitate them and their actions; these guys—Kevin Durham, Jeremy Franks, and Matt Henderson, to name a few—through their example were able to instill in Stuart the desire to be more like Christ. He said he specifically remembers noticing their “priority of being obedient.” Now, since the age gap is not as much of an obstacle, Stuart and those guys are peers.  They “bear each other’s loads.” It is incredibly important that the staff at Frontier Camp be an example – to campers, to parents, to each other – because this is the first layer of discipleship.

Stuart recalls having conversations with fellow full-time staff during the years when he served as the Summer Staff Director.  He notes that many of these conversations helped guide him toward being a pastor. As the Summer Staff Director, Stuart mostly interacted with the staff (as the title implies).  FC summer staff are in their late teens and early twenties, a “critical season of life . . . where everything they’ve been taught their whole life while growing up in Christian homes is being challenged aggressively.” When the staff are away from their normal social environment for a few months, there is a concentrated amount of time to teach them without distraction. It is an opportunity that Stuart noted can be “seized for the kingdom.”

He was intentional about helping the staff to ponder God in deep ways.  He wanted to make sure that the staff heard the “good stuff” instead of batting around “trite clichés and simple platitudes.”  His goal was to send staffers away more transformed into the image of Christ.  This is discipleship, plain and simple.

When I had asked Stuart if I could interview him for the FC blog, he said he was thinking that the first time he ever got up to preach, one person speaking to a (mostly) silent crowd, was as program director the summer he was twenty. He remembers being nervous, despite the fact that it was a crowd of eight- to twelve- year-olds; he did not want to mishandle the Word. From that moment on God provided other opportunities that directed him toward being a pastor.

One of those opportunities was returning to camp as a guest speaker.  Also, when on full-time staff, Stuart filled the pulpit at nearby Lake Baptist (eventually being asked to be the senior pastor at the end of that summer). He said the “big shove” toward pastoral ministry was going to Haiti. There he talked through Ezra, preaching in Limbe, to what he described as a “first-century feel” church. He knew then for certain God was calling him to be a pastor. Returning to FC, many of the full-time staff, specifically Matt Raines, spoke to Stuart about his gift for preaching and teaching, evident because of his pastoral role on staff.

Being a pastor requires discipling by example; it is near impossible to individually disciple each member of a congregation, being an example is important. Just like the staff at Frontier Camp disciple by being an example, so does a pastor. Serving at FC was preparation for Stuart’s role as Senior Pastor at Tomball Bible Church. God used camp to bring older, godly men into Stuart’s life who discipled him and helped him realize his calling.

It is always best to end with the words of the protagonist; they can often say in a few words what took the writer a few hundred words to describe. Pastors have a job that is more than full-time: after hours visits, preaching on Sundays, attendance at most church functions, outreach—and the list goes on. This is not a job for the weary or faint of heart, but neither are the roles of Frontier Camp staff.

Nearing the end of our conversation, I asked Stuart if there was anything else he would like to share. After thinking for a moment he responded, “What camp does for people beyond anything else is that it has to make you serve when you’re tired and you don’t want to. People know how to work when they have nothing left.  When at the end of their rope, they continue to serve. For college kids that’s worthwhile.”

(Stuart, as a summer staffer, is pictured above on the far right participating in one of FC’s infamous rodeo skits.  Anna, who is Stuart’s wife and also served on summer staff before they were married, is standing next to him in this picture.)