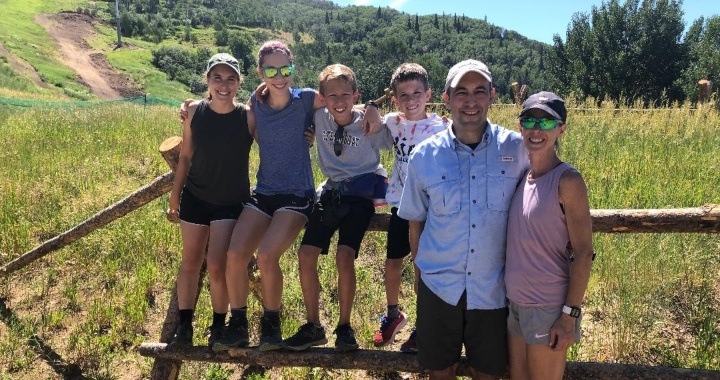 By Matt RainesSeptember 6, 2019No Comments

When Hurricane Harvey made landfall in August 2017, everyone in the Houston area knew their lives were about to change.  Damages amounted to upwards of $125 billion, and at least 103 Texans died in the storm; hundreds of thousands were rescued.

Rico and Molly Urbani’s Bellaire home – and entire neighborhood – flooded. It took a year to repair and rebuild, so the Urbanis did what they needed to do. They prayed, trusted God and sent their kids to camp.

“I remember Frontier Camp reaching out to us in the days after the storm.  That meant so much to us,” said Molly Urbani, a mother of four. “FC came alongside us on our journey and reminded us we were not alone.”

The Urbanis opened the second floor of their home to elderly neighbors and another couple who had extensive damage to their one-story homes. “The storm was huge and overwhelming, but we saw the Lord carry us through,” Molly said. “As soon as the flood waters receded, we had friends and strangers streaming in to help tear out the floors, sheetrock and cabinets. Our entire first floor had to be rebuilt and refurnished.”  For almost a year, the family lived on the second floor, with a two-month break at a friend’s house to get away from the debris and construction.

“During the summer after Harvey, as things were being finished on our house and we were moving back downstairs, three of our kids attended Frontier Camp multiple times,” Molly said. “Henry went three different weeks! FC was such a blessing to our kids as the dust settled and we moved back into our house. It was so good to know our children were having an awesome week and being loved as we closed out the year of Harvey chaos.”

The Urbani family learned about Frontier Camp more than a decade ago from church friends.  “We were homeschooling our children in that season, and we loved the idea of them going to a Christian camp, gaining independence and having adventures on their own,” Molly said. “Our kids love camp — especially being on the lake, riding horses, growing in God’s Word, and time with friends they have brought to camp and new friends they have met at camp. We keep sending them back because of the safe environment, the Christ-centered teaching, the outdoor activity time and the character that is developed in our children at summer camp.”

The Urbanis’ oldest daughters, MaryGrace and Cate, first attended FC in 2011 at the ages of 10 and 8. Now MaryGrace is a freshman at the University of Tulsa.  Cate served on the camp’s work crew this summer “because she wanted to bless other campers as she had been blessed.”

The boys – Henry, 12, and Matthew 9, have also been campers. “Henry loves Frontier Camp so much he would stay all summer if he could,” Molly said. “He cannot wait to come on staff.”

The Urbani kids have taken what they learn at camp and shared it with their parents during family vacations. “Camp songs are awesome,” Molly said. “When we hike in the summers in Colorado, our kids loudly sing FC songs along the trails.”

“Our kids thought the boatsmanship class was incredible and challenged them in new areas,” Molly said. “Cate made a dear friend at camp her first summer; since then they have been cabin mates and maintained their friendship; they also continue to meet up outside of camp to see each other.”

The Urbanis and many other families are fond of the Recharge program and personal notes from its coordinator, Liz Henderson. According to the Frontier Camp website, Recharge provides each camper a Bible study lesson in the mail following their stay at camp. When they send in the question part of the lesson, they get a new study and a note from Liz. The program encourages campers to have a daily quiet time with the Lord and continue their relationship with Christ even when they’re not at camp. “It has brought good fruit into their lives,” Molly said.

For this reason and others, Frontier Camp stands apart from other summer camps. “It has been good for our kids to be discipled by other believers,” Molly said. “Being with other kids has helped our children as they have gone to school and worked through issues. We see FC definitely helping our kids in developing their faith individually. FC has also given our kids more confidence as they faced hurdles and had new adventures at camp.”

Having four kids away at camp – especially that summer that Henry was gone three times – can be tough on parents, but Frontier Camp offers daily updates and photos so those back at home can see their kids or siblings learning and growing. “Pray for your kids, especially while they are at camp,” Molly advises other camp parents. “The Lord is at work.”

The Urbanis have a special verse that signifies their relationship with Frontier Camp:

“And let us consider how to stir up one another to love and good works.” – Hebrews 10:24