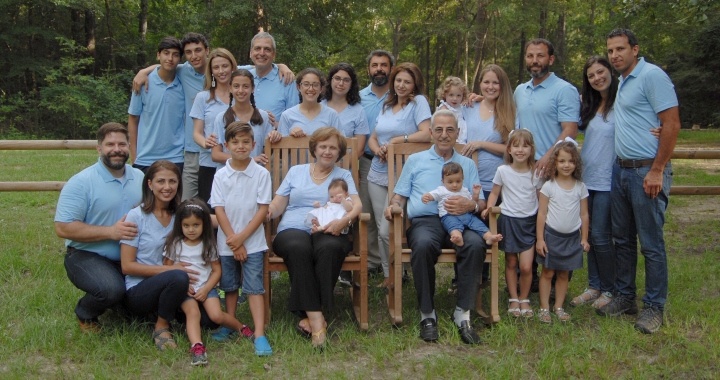 By Matt RainesSeptember 13, 2019No Comments

‘Go Therefore and Make Disciples of All Nations’

“God has called them to ministry,” Silva said. “Their ministry is church planting. My dad raises pastors and leaders in different parts of the Middle East region. With the war, a lot of people have left their homes and lost everything. They came to the church for help. My dad started a program to reach out to the refugees with the Word of God. Thousands of people have accepted Christ, many from non-Christian backgrounds. The Lord has been so good.”

But what isn’t so good, Silva explained, is her concern for the health and safety of her parents, Ibrahim and Amalee Samara. She wants her young children to know their grandparents.  But her family is in Katy, Texas, while her parents are operating a ministry in the Middle East. Her brother John is operating Ananias House in the Middle East and North African region and her brother Sila and his family live in Lebanon, where they have been working with refugees for the past five years.

So what does all this have to do with a Christian camp in the Piney Woods of East Texas?  A lot.

The Samaras joined with their children and grandchildren at Frontier Camp’s Fort Knox retreat center this summer. A total of 24 family members broke bread together, enjoyed camp activities, and soaked in the wisdom of their patriarch Ibrahim as he led daily prayer and devotionals.

“We were able to disconnect from distractions and burdens, minister to one another, see God in nature, have fun, and refresh our hearts and minds,” Silva said. It was actually one of the most peaceful gatherings we’ve had, though one of the largest, with all the new additions of the grandkids and babies. We are truly grateful for it and pray the Lord will bless others like he did us. We hope to have the honor to do it again.”

The gathering was arranged by a friend of the Samaras who serves on the Frontier Camp board.  “Fort Knox offered us this opportunity this year, for my parents and siblings, some in ministry, to unplug and pour our hearts into one another,” Silva said. “Being under one roof was such a blessing to get refreshed and spend time listening to the wisdom my parents brought into our lives. My dad hosted a devotional every day and addressed the adults and grandkids with the truth of the Word and godly insight.”

Silva’s children are just 3 and 5 years old, but the youngsters enjoyed the opportunity to play with their cousins and spend time with family in one of the beautiful retreat spaces the camp has to offer.  And the grandmother got to hold her precious newborn grand babies. They were surrounded by pine trees and had spotty WiFi, a blessing when every moment with family is precious. At this family reunion, Silva said she noticed that her parents were honing in on the quality time with their grandchildren.

“Dad would address them specifically and their walks with Christ, talking to them about how to stand up for their faith, how to be attentive to what God is saying, teaching them that morals and values come from the word of God, encouraging them to stay in the truth,” she explained. “God the Father is the only one who can change your heart and your life. They only see him once or twice a year and they were very attentive. It opened their eyes that God is way bigger than them.”

Silva’s brother Sila, his wife Charlotte and their four daughters came from Lebanon for the get-together. “That was icing on the cake,” Silva said. “The girls, and all the grandkids, got to run around in nature in such a serene environment. It was a sweet blessing to us all. The guys at the camp helped us with activities and were so kind in serving us. It made our experience very special.”

Her parents’ service in the Middle East is draining, Silva explained. Her godly parents, whom she considers “pioneers” for Jesus, need an occasional reprieve for rest and fellowship.

“Being able to unite, rest and seek God in fellowship with family has definitely blessed them and all of us,” she said. “We had fun, we rejoiced, played, prayed, loved on each other and saw the grace of God pour into us during this short time together.”

The Samaras face quite a bit of opposition to their ministry in the Middle East.  But they also have other concerns. Silva’s brother-in-law is a doctor and was able to assess their medical conditions when they were in the U.S.  Silva’s mother Amalee, the principal of the only Christian, Arabic-speaking elementary school in the country, suffers from osteoporosis and knee and hip pain.

“It’s limiting her a lot,” Silva said. “She can’t have surgery there; the risk is way higher.”

The Samaras have discussed training leaders in the Middle East for six months and returning to the U.S. for six months.  But the matter didn’t come up at the recent family gathering.

“My dad believes that as long as you are breathing, you serve God fully,” Silva said. “I don’t think they will come back here full time, though we pray for it. They say you can’t retire from serving God and they continue to tread on heavy soil with the message of Jesus and building the church in that side of the world.”

The Samaras rely on prayer – and their children are leading that charge. “Ananias House seeks to give the church in that region the tools that will help sustain itself to do the kingdom work,” Silva said. “My parents live on what God sends. They are not actively supported by any church. My mom works but my dad is a full-time minister. He has done it all his life as part of his existence. They live by faith.”

Before the war, the population in the area they serve was about 10 percent Christian. Now it’s about 4 percent Christian with Kurds, Muslims and different sects of Islam dominating local religion. “The need to know Christ is huge,” Silva said. “Spiritual warfare is always happening. We just ask people to fight for them spiritually through prayer.”