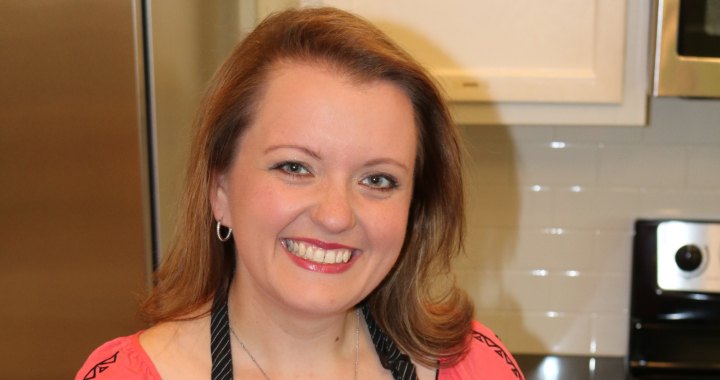 By Matt RainesOctober 18, 2019No Comments

As Frontier Camp’s 50th anniversary approaches, we’ve continued to learn more about the people whose lives it changed.  Some went as campers to learn how to wakeboard and ended up accepting Christ and being led to the mission field. Others went as staff members and found a spouse. Some went with their parents for dinner and ended up staying on as kitchen staff, only to have their parents later send along clothes for the summer on a Greyhound bus.

It’s not uncommon for a current or former staffer to express the sentiment that they were in the right place at the right time when it comes to Frontier Camp.  Such is the story of Kate Rudasill, who went to Grapeland one weekend the summer before she began college. She was there to pick up her best friend, Denise, who was working in the kitchen.

Kate spent the night. She stepped up to help out in the kitchen the next day because the food services director at the time, Carol Keifer, was out sick.  “We made chicken enchiladas with Maggie Raines,” she recalled. “While I was serving, Matt [Raines, then the assistant director] came and asked me what I was doing the next summer. I was busy getting ready to move to Texas A&M, so the thought of working at camp went to the back of my mind. Then, during my freshman year at A&M, I served at the Aggie [Baptist Student Ministry] where I met Matt’s mom, Barbara Raines. She also encouraged me to work at Frontier Camp the next summer.  So after a semester of summer classes, I headed to Grapeland.”

And a lot of people praying for a Christ-centered staff.

“After that first week of summer 2003, I knew Frontier Camp was a special place,” Kate said. “It was incredible to me how the Lord could bring together a team of teenagers, college kids, and full-time staff to teach campers about the love of Jesus. I often say that FC got into my blood and just hasn’t left. I started working retreats and was back each summer. Camp quickly turned into my home. The staff’s camaraderie and teamwork made the long days fun. The Lord used our friendships to encourage one another in our relationships with Jesus.”

Working in the kitchen for 12-plus hours every day didn’t offer much opportunity to interact with campers other than in the serving line.  So it was often difficult to see the impact that God was having on individual campers, Kate noted.

“A huge part of the ministry at camp is growing and discipling the summer staff,” she said. “When I started full time in 2007, I wanted to continue having daily kitchen staff devotions and prayer time that Carol had when I was on summer staff. I asked if we could get a copy of the cabin reports from the senior staff meeting each morning so that we could hear how things were going.  We wanted to be able to pray for specific campers and counselors. (Thanks Matt Henderson for typing those for us all the time.) Getting to hear about how the campers were doing and praying for specific campers and counselors was a huge encouragement to the kitchen staff.  It helped remind us that all of our hard work was part of the whole ministry at camp.”

Discipleship is also a common thread among those who have spent a lot of time at Frontier Camp. The kitchen staff, Kate says, lived out Colossians 3:23: “Whatever you do, do your work heartily, as for the Lord rather than for men.”

“We made messes (and cleaned them up), experimented with recipes, had meetings in the freezer, wrote a cookbook, renovated the kitchen, broke a few things (sorry, Richard) and cooked out of a mobile kitchen for several weeks,” Kate said. “Teaching and serving alongside the assistant cooks, kitchen maintenance team, and other support staff was one of the biggest honors of my life. I’m so thankful the Lord gave me 12 years at Frontier Camp.”

There’s no doubt that camp is a special place.

“FC is a refuge from a loud and complicated world,” Kate said. “It was my home and refuge during busy college semesters.  It was a place to get away from the noise, turn off the cell phone, get out into God’s creation to spend time with Him. Even during the busiest days at summer camp, you could find a few minutes of quiet. For me, it was early (really early!) mornings walking around camp, making coffee in the dining hall, or sitting down by the lake. I don’t think many people could come to camp and not see the Lord in it – the trees, the lakes, all the animals – it’s a place that shouts of His glory and majesty.”

She added that she got to see God building relationships between staffers and campers.

“It might only be seven days, but those days are so meaningful,” Kate said. “The campers get to learn about God’s forgiveness and the love of Jesus. And they see it lived out through the staff.  In turn, the staff is reminded of the uniqueness of a childlike faith.  They are asked hard questions that send them to the Word in search of God’s truth.”

God revealed His faithfulness to Kate over the years as the camp went through change and growth, as did its staff.

“We completely overhauled the main dining hall’s kitchen and we built Fossil Creek (with a new kitchen). Those were really good tests of faith,” she said. “We started our first week of Teen Camp 2014 at Fossil Creek without an oven and without a dish machine. It was also our first week of serving family-style.  We didn’t have a clue what we were doing or how we were going to get it done. But God! He knew and He had a plan.  So we tried to keep a good attitude and trusted that it was all going to work out. And it did … just in His timing and not mine!”

Cooking at camp was a joy, Kate said. Those who get to eat the food also say it’s one of the best things about Frontier Camp.

“We wanted the campers to come to camp and be able to focus on the important things – spending time with Jesus, learning about His love and forgiveness, and hearing God’s truth – and not be distracted by homesickness or hunger,” she said. “We wanted to do anything that we could do to make the camp experience more comfortable and fun for the campers through meal times.”

The kitchen staff would listen to southern gospel music by the Gaither Vocal Band on Sundays.  They would hold Disney dance parties during after-dinner cleanup.  Matt Raines, Hans Meinardus and Lee Bertram were always game for creativity in the kitchen, Kate explained.

“We had theme nights and specialty meals for retreats and Thanksgiving in July,” she said. “You want to roast 15 turkeys? Go for it! Medieval night and you need 30 wooden bread boards? We’ll get someone to make them for you! Sunday brunch for the ladies scrap booking retreat? Let’s go all out and get glass plates and pretty serving pieces and make it really fancy!”

“One morning while Amanda Olson and I were making pancakes, we could not get the pancake batter smooth. We had the brilliant idea to turn Papa Bear (the giant Hobart mixer) up to 4 – the highest setting – to see if we could get rid of the lumps in the batter,” Kate said. “Between pushing the mixer’s start button and pushing the stop button eight seconds later, pancake batter had been flung from one corner of the kitchen to the other.  Amanda and I both were covered!  It was dripping to my shoes. Carol walked in about a minute later and was nice enough not to laugh or yell at us. We then spent several hours over the next several days scrubbing pancake batter off of every single kitchen surface, including the ceiling.”

There are so many special memories, and so many scriptures that summarize Kate’s time at Frontier Camp.

One of her favorites is Ephesians 4:1-3: “Therefore I, the prisoner of the Lord, implore you to walk in a manner worthy of the calling with which you have been called, with all humility and gentleness, with patience, showing tolerance for one another in love, being diligent to preserve the unity of the Spirit in the bond of peace.”

After the kitchen was remodeled in 2012, Liz Henderson cut the words to the scripture out of vinyl.  The verse was then displayed on the newly-painted wall, so the kitchen staff could see it as they were working.

“The unity, or lack of unity, of our staff could make or break a week at camp,” Kate said. “We read this verse often in the kitchen as a reminder that we were a team.  Whether it was a good day or not, we were going to serve as a team and treat each other with kindness and love.” 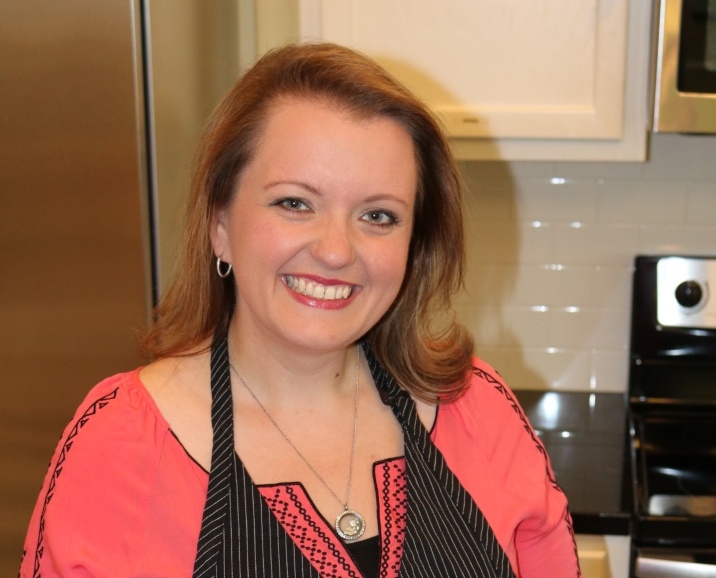 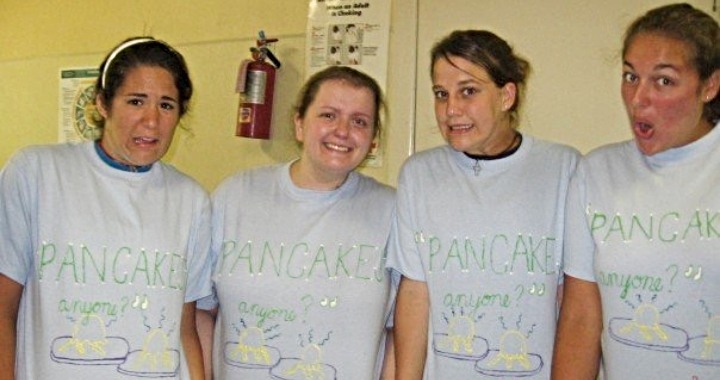