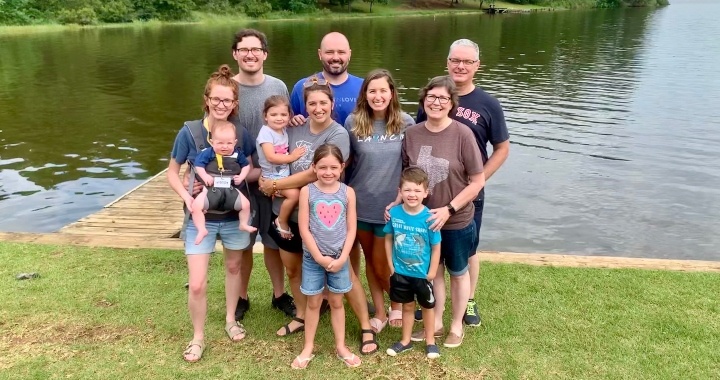 The story begins in 1992, when most of Frontier Camp’s current summer staff had not yet been born.

Shane and Janet Sanders were a young couple with young children living in College Station. Shane was leading The Navigators college ministry at Texas A&M University and planning a week-long summer camp retreat – but the venue backed out on him at the last minute.  He ran into a friend at Grace Bible Church who suggested Frontier Camp might be able to accommodate the group.

“I’d never heard of Frontier Camp,” Shane said.  But God was already at work. The following week, Wes Woodard, the camp’s director at the time, was at Texas A&M for “camp week” to recruit staff.  Shane met with Wes, and the rest was history.

“We were looking for a discounted rate,” Shane explained. “To help him get the camp in shape for the summer, we worked half days for five or six days. We came back almost every year through 1998 or so. I got to know Wes over that time.”

Shane took his boys, Stuart and Daniel, now 33 and 31, camping at Frontier Camp, and as soon as the kids, and later their sister Susannah, now 28, were old enough, they attended as campers. All three of their children later worked on staff.

A labor of love

Forty-three former or current Frontier Camp staffers met their spouses at camp. Both Stuart and Daniel Sanders not only met their brides at the camp in the Piney Woods of East Texas, they also made lifelong friends there.  It’s a common thread among those who go to Frontier Camp, whether as campers or staffers, that the friends they make will be in their lives for a very long time.

Shane and Janet Sanders saw notable changes in their children over the years, due in part to some of those changes.

“Stuart was the kid a little on the fence, even though he’s the one who became a pastor,” Janet explained. “He came home one summer and was really convicted about the music he’d been listening to. He said, ‘Mom I need you to take me somewhere to sell all my secular CDs.’ He had many.”

Susannah’s senior year of high school was challenging, her mother said, because her friends just hadn’t spiritually matured the way she had.  “They grew and matured spiritually so much more as staffers at Frontier Camp than they did at any other time in their lives,” Shane said. “They learned how to work hard, be responsible, walk with the Lord, a lot of basic discipleship. All three of our kids grew immensely at camp.”

Stuart is now senior pastor at Tomball Bible Church. He and his wife, Anna, have three children: Mallory, Shane and Daphne. Daniel is a doctor at Spine Team Texas in Allen. He and his wife, April, are parents to 1-year-old Murphy. Susannah is a VP at Citicorp in internal communications and lives in Irving.  All three kids were campers and later served on staff. Daniel and Stuart were both program directors.

Summer camp director, Hans Meinardus, liked the style of the Sanders boys, different in their own ways, but equally committed to serving the Lord through camping.

“Daniel came up with a way to streamline the programming,” Janet recalled. “He was very efficient.”  Daniel also worked as a camp medic and worship leader; Stuart and Anna became full-time staff and lived on site in a home that had belonged to many FC legends before them.

“Anna, Autumn [Meinardus], Maggie [Raines] and I painted the entire interior of that house,” Janet said. “They loved it there, and we loved the extended family that we all got out of them being there.”

“The year-round staff was so good about taking in the summer staff and really getting to know them,” Janet said. “Susannah said several times Maggie checked with her to see if she had any hard campers or if there was anything she needed to pray about. It made them feel a part of it, like they were part of the family.”

Frontier Camp has a special place in the hearts of each member of the Sanders family – and that’s not just because the food is so good.

Shane served on the board for more than 20 years and still serves as the camp attorney when needed.

“We loved camp from the beginning,” he said. “I used to tell the board members that we were more focused on campers than staffers, but the ministry to staffers is really important.”

Janet, a recreation and parks major, had also worked as an assistant camp director for a Camp Fire Girls camp and knew the value of camping.

Shane and Janet Sanders  are truly a camping family. When asked what sets FC apart from other Christian camps, they could talk for days.  “The spiritual culture and a lot of like-minded kids,” Shane said. “Stuart suffered some when we moved to Waco and he attended a large public high school, but his co-counselors at camp kept up with him all year long. It’s a great place for summer jobs, a great time for growth, and it kept them out of trouble.”

The environment was also great for church retreats, where Shane has taken men’s groups from Grace Bible in College Station and the Sanders’ current church in Waco.

“We love the family environment, the extended family in the body of Christ,” Shane said. “It’s a nice place, with a lot of good memories and good experiences. They do a good job of welcoming people out there. They work to keep the facilities up. You feel like you are special there.”