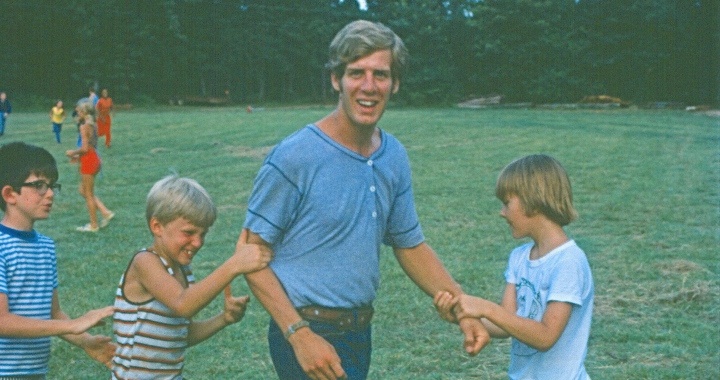 By Matt RainesNovember 22, 2019No Comments

Has it Really Been 50 Years?

Frontier Camp celebrates its 50th anniversary starting tonight and all weekend. It isn’t too late to join us tomorrow at 10 a.m. for a wonderful time of thanksgiving for what God has done over these five decades on this piece of ground in the East Texas piney woods. I hope to see you here! In the meantime, for this edition of Friday Stories for Frontier’s 50th, let’s take a look at just how this thing we call FC got started…

Volunteer leaders from several churches across Texas who led a church program for youth called Christian Service Brigade, informally began talking about how great it would be to have a youth camp for their groups to retreat to in order to work on relationships with one another and with God.  These men included Bill Standley, Frank Hamilton, Art Olson, Ben Woltman, and Ron Sardone.  They had a number of things in common, including a desire to see young people come to know Jesus and grow in Him.  They shared a traditional dispensational view of the Scriptures as inerrant, a love for kids, and a love for work and determination. The men had an interesting challenge however. They were from Houston, Longview, Dallas, San Antonio and other parts in between. They solved this problem by picking a centrally located spot and then began to look at properties.

The search was over when they met up with Bill and Elizabeth Strube of Houston who had some land outside of Crockett, Texas on the newly established Houston County Lake. More importantly the Strubes loved the Lord, had similar doctrinal convictions and also had a desire to see a Christian camp on their newly acquired land. The two parties struck a deal and Ark-La-Tex Frontier Camp was chartered in December of 1969.

Those who helped create the camp believed in the importance of its mission of leading young people to Christ.  Frontier Camp would not have succeeded without the founding members’ faith and commitment to trust God despite meager resources. A financial statement from October 1972 shows Frontier Camp’s “cash in bank” was a meager $14.66.  Founding member Frank Hamilton often covered costs out of his own pocket. Other early Board Members like Bill Standley tirelessly recruited volunteers.  He also rustled up the first tables and chairs for the camp’s dining hall.  Several young men like Mark and Scott Hamilton, Gerald Olson, Richard Stephens and Jon Bergeron, all of whom have maintained a lifelong connection to the camp, helped build cabins on weekends throughout the 1970s.

Over time, the camp went from “ticks, brush and briars” to a 35-building, 400-bed, air-conditioned facility on 131 acres known throughout the state for its water skiing program and stellar staff. The property now houses 21 cabins, 3 lodges, 2 dining halls, 2 outdoor gyms, 4 spacious meeting rooms, 3 sports fields, an infirmary, 2 lakes and five staff homes. Activities have expanded to include things like laser tag and cable wakeboarding.  Yet you can still find original camp favorites like horseback riding, woodworking, archery, riflery, crafts and outdoorsmanship going strong.

Richard Stephens, who has served on full-time staff for over 37 years, was a high school student in Longview in the early 1970s when he began spending weekends driving to the camp to work. He built bunk beds and did other construction work with many of Frontier’s pioneers.  “They had a boat, so we could go water skiing,” Richard said. “The camp, at that time, was nothing but land and young pine trees growing back after a cutting. We put sheet rock in the old dining hall, and we brought in equipment for air conditioning.”

Richard spent several summers at Frontier Camp maintaining facilities.  He worked briefly as a counselor and also scrubbed pots and pans. He eventually was offered an opportunity to join the full-time staff in 1982.   “I saw Wes at church, and my work was slowing down,” he recalled. “The oil business had collapsed, and I said, ‘Why don’t I just go work at camp?’ I thought maybe Wes would hire me for the rest of the spring and summer.  “The Lord had this thing going in His mind all along,” Richard added. “When the summer was over, Wes told me he was going to tell the Board they were going to hire me full-time. Bill Standley told me the same thing. It was a done deal.”

Although Richard is not often in the forefront, his work has been instrumental in making the camp what it is today. “I like what I’m doing and I like the Christian environment,” he said. “I know I need to be here. I’m a behind-the scenes person. There are people that can go far, and I help make sure they get there.”

The dining hall, built by Jon Bergeron and his volunteer corps, burned in spring 1982 – an occurrence that many have said was a transition in the camp’s history. The blaze is attributed to an electrical short.  But in retrospect as founding Board Member Art Olson said, “it was the hand of God.” “The fire, though it seemed like a negative thing, was a real turning point,” recalled Jeanette Betz, who worked as a cook at the camp for several years serving alongside her husband Art, the second Executive Director of Frontier Camp. “Everybody started working together. It burned down in the latter part of February and we had to get it rebuilt by summer.”

Arthur, who had recently returned to FC for a second stint, this time as Assistant Director, agreed that it was a time when people put aside differences and worked toward a common goal.  “It was a time of real challenge and a time to see God bring things together for us,” he said. “Wes [Woodard] said to me in the wee hours of the morning as the structure burned to the ground, ‘I guess God wants us to have a new dining hall.’”  Challenges like the dining hall fire proved to the full-time staff that they could overcome hurdles and work toward the most important common goal, winning souls to Christ.

Wes Woodard, Frontier Camp’s fourth Executive Director, who along with his wife, Jean, served at FC from 1978-2003, is adamant in his belief that the secret to the camp’s success is its commitment to the Great Commission mandate in Matthew 28:19-20: “Go into the world and make disciples of all nations.”  “It’s one thing to say you believe that,” he said. “Lots of Christians say it. Frontier Camp really does it. We do it on the basis of the authority of the Bible. Belief in Jesus’ death on the cross and His resurrection is what delivers us from hell. God gives us the opportunity to be led by the Spirit and experience the abundant life Jesus promises.  We really believe the Bible. There’s a war going on for the souls of men. God’s going to win.”

The Board brought Wes on at a strategic time in the camp’s young history.  Arthur had left to pursue the pastorate.  The program was struggling for identity, and a bad hire as Arthur’s replacement had left the camp in poor shape.  It was struggling to repay the original loan for the land.  The camp had worked with the Christian Service Brigade leaders and tried ministering to kids who could not afford camp. Something new was needed to stabilize the ministry and set it on solid footing going forward. But it wasn’t going to happen without a lot more work. You might say work was Wes’ specialty.

The approach that Wes took was to go to Houston to recruit a larger market.  This made it possible for camp to actually have a budget that wasn’t just on paper. While 60 percent of the campers are still from the Houston area, the camp has branched out recruiting pockets of campers from Waco, Bryan-College Station, Waxahachie, DFW and of course locally in Crockett and Grapeland.

As Wes began to contemplate retirement, he brought on Matt Raines.  Matt was a summer staffer Wes had grown to trust after four summers of being a Senior Counselor and Program Director. Wes and Matt worked together for six years.  Then Wes retired in 2003 successfully passing the torch to Matt. With a commitment to maintain the camp’s clear mission of “Making disciples of Jesus by sharing God’s Word in His creation” and a strong foundation laid by those who had come before him, Matt set about to address some key areas:

In 2004 Frontier Camp offered its first ever Angel Tree Week for children of prisoners as they partnered with Prison Fellowship for this outreach week. 2006 saw the camp begin replacing the old boys’ cabin and shower house.  Next, we added the four bedroom Bethel Lodge to house retreat leaders. In 2007 camp leaders took several summer staffers to Haiti to plant Jacob’s Well, the first Christian camp in Haiti. And, in 2014, Fossil Creek, a brand new 134-bed facility with a cable wakeboard lake was opened for teens in the summer and more retreat groups the rest of the year.

What’s next for Frontier Camp? Well, while we wait on Jesus’ return, the plan is simple.  Continue to strive for Excellence in Christian Camping by sharing the Good News with campers and guests. Here are some ways we can do this together:

Perhaps God wants you to have a part in these stories yet to be written? Consider your role prayerfully and contact us about how you can help kick off the next 50 years.

Full-time staffer, Richard Stephens, as a counselor back in the 1970s 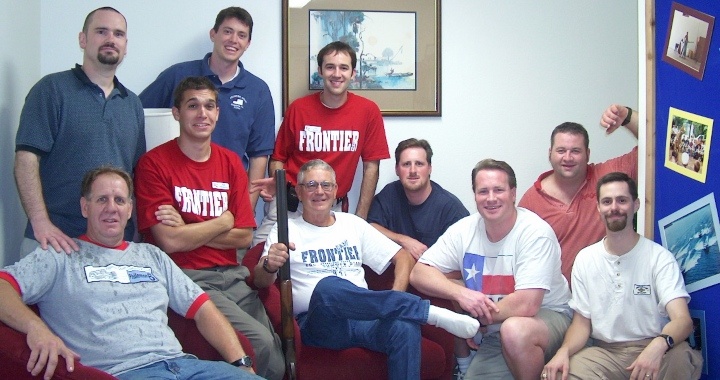 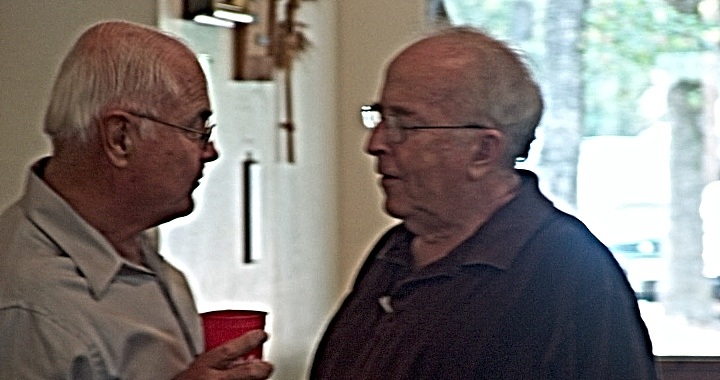 Board members, Ben Woltman and Frank Hamilton.  Both are with the Lord now.