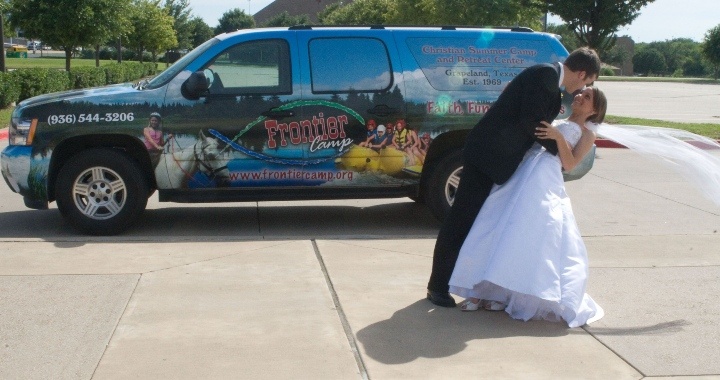 This Sunday Will Carmichael and Brittany Baca will marry in North Texas. Will and Brittany met while serving on summer staff together here at Frontier Camp and, like 43 other couples before them, later married.

We don’t promote match-making among staff at Frontier Camp (for the most part!). However, serving alongside like-minded young people is certain to produce some romantic relationships. Let’s face it, when you work long days serving others in extreme heat, you get to know other people on staff pretty well. A great definition of character is, “what spills out when a person is bumped.” A good number of fist bumps certainly comes with working on staff.  But it can also lead to some other kinds of bumps as well. True character comes out of staff over the course of the summer, so it is no wonder 44 couples and counting have found their spouse in this paradise in the pines that we call CAMP!

Now, we still firmly teach staff that “Camp is for the Camper.” That will never change. If you’re on summer staff just to meet a beautiful girl or a cute guy, that will come out quickly and you won’t make it at Frontier Camp. In summers past, there was even a rule that you could not work on staff with a boyfriend or girlfriend.  This was to further ensure that the focus would remain on campers. But, just because you didn’t start the summer with a significant other, doesn’t mean that it will finish that way.

Just ask current Teen Camp Director Matt Henderson. He worked several summers focused on serving the campers and the Lord. It became well known among the staff that Matt wasn’t going to date around.  He even joked that he may remain single. At his first training weekend ever at FC, which was lifeguard training in 2001, he met Liz Rupe.  Liz was serving as Head of Waterfront and Head Lifeguard.  While their relationship started off as co-laborers for the gospel at camp, over the next 4 years of serving together both in Summer and Retreat ministries, their working relationship grew into friendship which grew into marriage.

The Hendersons aren’t the only ones on Full-time staff who met while on summer staff at FC. Summer Staff Director Dusty Stone married Sarah Stone after meeting as counselors. Executive Director Matt Raines joked that it was the easiest wedding he ever performed (and he has performed 18 for staffers over the years) because they already both had the same last name!

Speaking of Matt Raines, he met his wife Maggie (McMinn) when they were Senior Counselors back in 1992. They were interested in each other that first summer but didn’t do anything about it until that next summer.  Maggie arrived at camp already in a relationship with a young man out of state.  But it didn’t take Matt and Maggie long that second summer for both to realize God’s plan for them included marriage to each another. They did just that after the summer of ’95.  Wes Woodard pronounced them couple #8 as he pronounced them man and wife!

And Maggie wasn’t the only McMinn to marry her camp sweetheart that summer. In June, Trading Post Manager, Melissa McMinn, married Head Wrangler, Andrew Humes. Two more of the McMinn children met their spouses at camp as well.  Rebekah married Lee Bertram in 2002 followed by Tommy marrying Baylee Wolcott in 2013.

Unfortunately, as you might imagine, not all of the marriages have been successful. Two of the 44 FC couples have divorced. While this is very sad, the converse is that 95.5% of the couples who marry after meeting at FC, stay married.  That is quite special and is truly bucking the worldwide trend! This statistic tells one that the bonds forged in the fire of summer camp are pretty tight. These are young people who take the admonition of Scripture seriously when we are told, “What God joins together, let no man separate.”

Who will be next on the FC Couples list? Well, that is easy to answer. Will and Brittany! Beyond that? If you ask a few staff members, they can probably name off three couples who certainly look like the real thing and will likely be on “the list” soon enough.

I hope you’ll take a minute to pray for Will and Brittany and all of these camp couples. Pray they will glorify the Lord together and point others to Him.

It must be something in the camp drinking water th

Did you know Frontier Camp has an Amazon Wishlist?

Looking for a reason to getaway and relax? There i