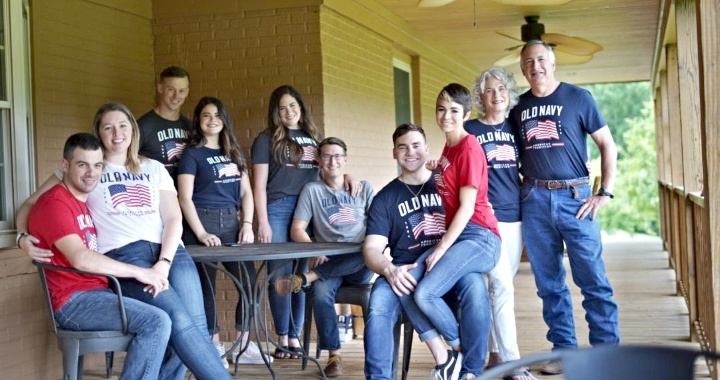 By Matt RainesDecember 19, 2019No Comments

As the year 2019 draws to a close and we wrap up a year’s worth of stories that celebrate Frontier Camp’s 50th anniversary, it’s only fitting to recognize the Gonzalez family.  They had campers and staffers at FC every summer for almost 20 consecutive years. Their stories are pretty impressive. These kids have been through the Naval Academy, a Haitian earthquake, and nursing school.

The Gonzalez clan includes parents, Gary and Marie, and four children –  Coleman, Noelle, Hope and Grace.  They first heard about Frontier Camp from the McMinn family of Tomball.  Maggie McMinn married Frontier Camp Executive Director Matt Raines (long before he was executive director).  Matt would go on to officiate the weddings of three of the four Gonzalez kids.

“Frontier Camp has had a huge impact on our family,” Marie said. “From my perspective, through their serving at Frontier Camp, my children’s faith became their own, not just what they had been taught by us. They learned valuable lessons about working alongside others and working with children; hopefully they will all have great parenting skills one day. They met staffers and campers who carried some very sad baggage. This helped foster compassion in them.  It prepared them for relationships with people from diverse backgrounds in college and adult life. This also gave them a greater appreciation for the blessings we have.”

Coleman and Noelle, the two eldest children, first went to home school week when they were about 9 and 7 years old. After that, a Gonzalez was there from 1996 to 2015.

Coleman, now a submarine officer stationed in King’s Bay, Ga., began working as a junior counselor at age 14.  He worked five and one-half summers as a junior or senior counselor.  “The first summer he worked there, he learned that he didn’t have to always keep his T-shirt tucked into his shorts,” said mom Marie. “He really wanted to make a good impression at his first job.” Coleman was later told that he and former Executive Director Wes Woodard, who is now 80 years old, were the only camp staffers who tucked in their T-shirts. “That’s good company to keep, I suppose,” said dad Gary Gonzalez.

His final summer at FC, Coleman left halfway through to report to the U.S. Naval Academy in Annapolis, MD. He’d been well-prepared by the traditions of Frontier Camp and his self-imposed workouts. While working at FC, he ran all the way to Crockett on more than one occasion to meet his camp buddies at the laundromat.

“Coleman loved camp,” Marie said. “He loved the people and all the traditions, even the old shower house. He likes everything old-school.  Not being a big fan of change, he was sorry when the shower house was replaced.”

Coleman exhibited “excessive zeal” in playing sports and games with the campers, his mother added. “He enjoyed running the trolley back up the hill for Matt Raines because it made him stronger for fall football and the Naval Academy,” she said.

Coleman’s wife Amanda, “is absolutely amazing and totally awesome, in spite of being the only one of our children or our bonus round (the in-laws) who never attended or worked at FC,” Marie says.

The second Gonzalez child, Noelle, also has a pretty heartwarming Frontier Camp story. She recently shared at the camp’s 50th anniversary celebration that she met lifelong friend Susannah Sanders at FC many years ago.

“When you’re around each other all the time, it’s like, get along or there’s no other alternative,” Noelle said as she served on the “Formula Panel” at the November celebration event. “You learn to work things out and you get super close to people really quickly. Doing ministry together, that brings another layer to the friendship.

Susannah and I were put together in a cabin in 2008. We had a vague knowledge of each other. Immediately from day one, I would say we were like the best duo ever. We were living life together. We have very different gifts and she helped where I’m deficient.”

Another friend Noelle made at Frontier Camp – when she was only 10 years old – was Dan Frantz, who is now her husband.

After Noelle had already bought tickets for her third trip with Frontier Camp staff on the Jacob’s Well mission trip to Haiti, the dates changed. Noelle, now a nurse in Wichita, KS, went anyway. “She found a mission/burn clinic where she could volunteer working with some American nurses after the rest of the FC staffers, including Daniel, had gone home,” Marie said. “That put her right in the middle of the 2010 Haiti earthquake.” That earthquake claimed the lives of – by some accounts – 300,000 people.

As a result of the devastation in Haiti, Dan Frantz, now a doctor in residency, changed his major to pre-med. Noelle returned to Haiti for a semester after she graduated college, working with children and providing first aid for the villagers. During that time, she and Dan talked by Skype almost every night. Dan and FC staffer Hudson Stone returned to the devastated Haiti on their spring break to work on construction projects.

“By the time Noelle moved back, she and Dan were dating,” Marie said. “They worked one last summer together when Dan was program director and Noelle worked in the infirmary. They were married in 2012, by Matt Raines.”

Gary Gonzalez, father of Coleman, Noelle, Hope and Grace, said he bought the kids a telephone calling card when the two eldest first went to camp. “I still have that card and it still has money on it,” Gary said. “They never really felt compelled to call home.”

Child No. 3, Hope Gonzalez, began attending homeschool camp as soon as she met the age requirement. She was hired to serve on work crew at 14 and went on to be a junior and senior counselor. “Her last summer at camp, she encouraged her boyfriend, Tristan Windham, to apply.” Marie said. “He was the worship leader that summer and received the Heart Award.” Matt Raines officiated the wedding of Hope and Tristan in 2016. She is a nurse and he is a computer programmer. They currently live in College Station.

The youngest of the Gonzalez clan, Gracie, followed in the footsteps of her siblings.  She headed out to the piney woods of East Texas as soon as she was old enough to be a camper, then joining the staff when she met that age requirement. Her last summer on staff, she served as Head of Boats. “The first day of staff week 2014, when Michael Nerdahl arrived fresh from Minnesota, Gracie saw him at lifeguard training. Then she sat by him at dinner,” Marie recalled. “Afterward they both volunteered for dishwashing duty. Three years later, they were married by Matt Raines.”  Michael and Gracie live in North Carolina where he is stationed as an officer with the U.S Marines.

It’s been said that a family that prays together, stays together. Maybe the same is true of a family that camps together. “I praise God that He has given me the desire of my heart – my children all love and serve Him. They are married to three fine men and a great woman who also love and serve Him,” Marie said. “I’m grateful to Frontier Camp, to Wes, Matt and Maggie, and many others who invested in the lives of our children.”