The Power of a Simple Bag of Chips

Valentine was a child helplessly caught in the grip of the foster system. Both his parents were in prison.  Living life without parents had caused young Valentine, just nine years old, to grow up aggressive and angry, lashing out at a world that had done him wrong. He was robbed of so many of the opportunities that many other kids seemed to take for granted.  The unfairness of it all had taken its toll on the young boy.

But in 2016, someone threw Valentine a lifeline! He was given the chance to attend the Angel Tree Summer Camp at Frontier. And that’s where Valentine got to meet a life-changer named Darryl Brooks. Darryl is the program director for Prison Fellowship in the state of Texas and he felt drawn to Valentine from the time he got off the bus on the very first day of camp. But like a wounded animal, Valentine wouldn’t let Darryl get close.

Then one day, Darryl noticed something strange. Valentine wasn’t touching his food in the dining hall at lunch. So later that afternoon, Darryl listened to the gentle guiding of the Holy Spirit. He found Valentine and asked him if he wanted a bag of chips. The Angel Tree staffers all carry a backpack loaded with snacks just in case the campers get hungry.

Valentine eagerly accepted the gift of the bag of chips and seemed to look at Darryl with a whole new perspective. The offer of that simple bag of chips changed Valentine’s thinking by opening a new door of possibilities. Now when he thought of Darryl, he thought that this was someone he could trust instead of thinking it was someone trying to hurt him or take things away from him.

But Darryl noticed something else that was strange. He noticed Valentine turning his back when he ate the chips. It was as if he were guarding his chips so no one could take them away.

Darryl’s heart went out to Valentine. What kind of home life does this poor kid have that would cause him to feel like he needs to guard a simple bag of chips? But Darryl knew all too well what it means to live a life where survival is the chief concern.

You see, in 1991, Darryl himself was incarcerated for possession of a controlled substance. He spent 11 long years in prison for his crime. But God had a purpose for Darryl, even in his long prison sentence. It was while in prison that Darryl met Jesus and became familiar with Prison Fellowship.

Darryl was released in 2000.  Since then, he has given his life to help others caught in the vicious cycle of crime, addiction, and prison…and all the pain and destruction that goes along with a life trapped in that cycle.

Darryl worked hard and was able to get his degree in Christian Counseling. He volunteered with Prison Fellowship.  Then in 2011 he was offered a full time job with them. Now he’s in a position to give back, bringing light into dark places and giving hope to the hopeless.

Angel Tree Summer Camp is filled with kids, just like Valentine, who get the chance to get out of their situation and just be a kid for a week. Because of the home life of many of these children, they are forced to grow up much too quickly, having to take the heavy load of responsibility for younger siblings while they are still kids themselves. “Childhood” is a distant and foreign concept.

At Angel Tree Summer Camp, children like Valentine get a few days to spend quality time with a mentor/counselor who loves them unconditionally. For most of these kids, it’s the first time they’ve ever been exposed to that kind of love and acceptance. The campers get to share rich experiences, often first time experiences, with a supportive peer group. They get to try new things, eat new food, meet new people and hear the loving Gospel of Jesus Christ.

Does a camp experience at Frontier change lives? You bet it does. And not only a short term change but change that lasts…for generations. Just like Darryl who met Jesus and is now paying it forward by sharing the love of His savior with a whole new generation of kids.

Angel Tree Summer Camp is a cooperative effort between Frontier Camp and Prison Fellowship. It’s a camp for kids from families where one or both parents are incarcerated. Today, Prison Fellowship is responsible for sending approximately 130 campers each summer to Frontier for the Angel Tree Camp.

Matt Raines is convinced that the relationship with Prison Fellowship is a blessing to Frontier. “One of Frontier Camp’s core values is ‘Interdependence in Ministry.’ Prison Fellowship decided that a summer camp experience was one of the most effective ways to reach kids for Jesus and to break the pattern that says a child who has an incarcerated parent is six times more likely to go to prison themselves.”

He further stated, “That’s why they put out a call for camps to join them. About that time, we had been praying for a partnership to help us connect with urban kids and God brought us together. When you write down goals and pray towards that end, why should we be surprised when God starts something like this?”

Since 2004 when the partnership began, Frontier has been honored to host over 2,000 Angel Tree campers. And the impact goes beyond just the campers. Frontier staff, most of whom grow up in stable, suburban homes are forever impacted by these kids and the ministry they have with them. They are well aware that God can change a life or open a door using something as simple as a bag of chips. 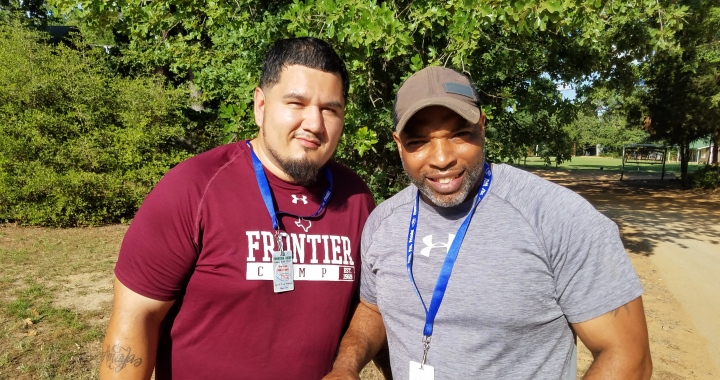