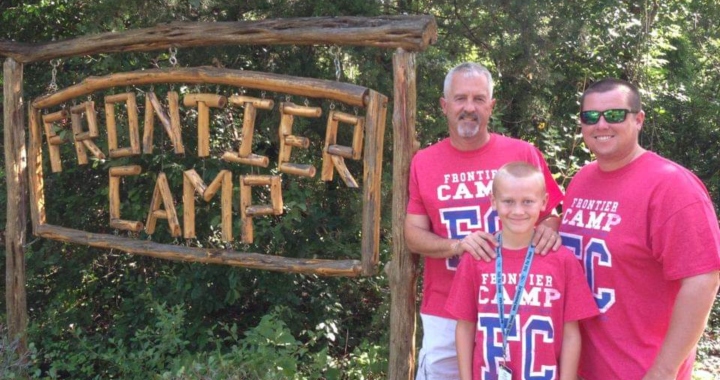 Derek Taylor has a unique story about his first car trip to Frontier Camp. In fact, his first trip to camp occurred before there even was a camp! Derek was only 8 or 9 years old when he remembers riding all over Texas with his father, grandfather and a friend looking for just the right site for a new camp.

On the drive that day, they found the perfect piece of lake front property for a camp for kids. The year was 1969 and the property would later become known as Frontier Camp. So who is Derek Taylor and why is this a camp story about legacy? Derek’s grandfather was Len McPheters and the friend in the car with them that day was “Uncle Bill” Standley.

Leonard McPheters was a founding Board member and served as the Board Treasurer for decades. Just a couple of years after the camp was founded, in 1971, Derek attended his very first week of camp. He was 11 years old. For the next several years, Derek became a fixture at camp. And while he was never officially on staff, he grew up doing whatever he could to help out. He just wanted to be at camp.

That began a family tradition that has now extended to three generations.

Derek still remembers riding the church bus to camp that first year. He met the bus with his backpack and sleeping bag. Even though his grandfather was a respected Board member, there was no easy road for Derek. He was expected to ride the bus just like the other campers.

A highlight of that first week of camp was getting to go down the zip line. Derek got to be one of the first. The zip line had just been completed, built by longtime friends of the camp, “Uncle Bill” Standley, Bob Montgomery and Bob Gross. Of course in those days, the zip line was just a simple T-bar that you sat on to go down. No harness or helmet or other safety equipment that’s standard rigging today.

When Derek thinks back on his camp days he says, “It’s hard to put your finger on, but there’s something special about camp. The secret ingredient somehow rests in the special relationship between a camper and his counselor, a mentor who isn’t really an adult yet, but who’s just a little older, like an older brother. This mentor sets a strong example and shares his story with his campers…and he shares the message of the Gospel. That’s when the Holy Spirit just seems to breathe life into it. And that’s when lives are changed.”

During those years Derek always attended Frontier Camp with a sense of legacy, a sense of ownership, of responsibility but never entitlement. His grandfather Len was clear on that. Derek hoped that maybe someday he’d be able to send his own children to Frontier Camp.

That dream came true years later, in 1988, when he had the chance to send his son, Jason, to camp. Jason was only 7 years old which, back in those days, was a year too young to come to camp.  But in actuality, he had been “coming to camp” for years, visiting his great grandparents, Len and “Mrs. Mac” McPheters, who lived just across the lake from camp. They wouldn’t miss taking Jason to camp on Thursdays to Rodeo Night.

So Derek talked to the director at the time, Wes Woodard, to see if it would be okay to send Jason.  Wes gave the okay. Jason thought Rodeo Night was as good as it could get.  But now he got the chance to stay in a cabin, eat in the dining hall and spend the whole week doing much more than just the Rodeo.

Most of all, Jason remembers Friday night’s “Royal Campfire,” where one at a time, campers got the chance to stand and share about something significant that had happened at camp. After they shared with the group, they’d toss a pine bough into the flames. Of course, the bough would flare up, symbolizing the fire of Christ that resides in all of us.

After the bonfire, Wes stood up and presented the simple Gospel message to the group. This prompted young Jason to come forward and give his life to Christ. And just like that, he was in love with Frontier Camp.

Jason attended camp every summer until he was a teen. Over those years, Jason’s life was greatly influenced, not only by Wes, but by summer staff “All Stars” like Carla Towery Villanueva and Jeff Bailey. After his camper years came to a close, Jason was brought on as summer staff.  Over the course of the next few years, he worked in the barn with the horses, served in the kitchen washing dishes, and worked with the campers as a junior counselor. Jason felt that being on staff was a way he could give back to the camp that had always been such a big part of his family’s life. Like his father before him, Jason always dreamed that someday he’d be able to send his children to Frontier Camp.

When Jason had kids of his own, he made sure Frontier Camp was part of their spiritual development.  He continued his family legacy by first sending his oldest son, Coby, in 2011. Coby became Frontier Camp’s very first 3rd generation camper. Since then, Jason has continued the tradition by sending his younger son, Ethan, as well.

These three generations have been a part of the tapestry that is Frontier Camp. And for the past 50 years, this family has included us as part of their family tradition. Who’d have thought that when Len McPheters joined the Board in those early days that his family would still be involved with Frontier Camp?

Len went home to be with the Lord in 1996. But the family believes he sensed that his time was short when months before, Len began to “download” details about what it took to be the Board Treasurer to his son Derek. He always reminded his grandson that, “This is the Lord’s money, not ours.”

In fact, it was during one of those download sessions that Len opened up his desk drawer to reveal a few coins. Derek saw the coins and quickly did the math in his head…$.88. Len gathered up the loose change and held it out in the palm of his hand. Looking down at the change, he told Derek, “You see that? It’s $.88 that someone, we’re not sure who yet, overpaid for their camp registration. When we find them, we’ll have this ready to give them.”

That’s when the real weight of responsibility came to rest squarely on Derek’s shoulders. He understood the role that his grandfather wanted him to take up. He knew how important it would be to sit on the Board and watch over the finances of this organization. It’s an important role to fill and Derek felt the weight of it; he knew he would be stepping into the legacy of his grandfather. Derek assumed the role of Board Treasurer in 1996 when Len passed away. He served in that capacity for several years.

Every time Derek worked on the books, looking over the camp’s finances, he would remember his grandfather’s words, “It’s the Lord’s money.”

Leonard McPheters, always known around camp as “Poopsie,” anchored this family legacy with a passion for ministry and for reaching kids with the Gospel of Jesus Christ. Len’s wife, Mrs. Mac, still lives in her house on the lake. Through the generations, they’ve carried a fire within them to capture the minds of young people and expose them to God’s love through building relationships with older mentors.

That’s what was special to Len…because he knew it is special to Jesus. And it’s that passion for the ministry of Frontier Camp that keeps this family forever tied to this camp. Who knows exactly when it’ll happen, but you can make a good bet that at some point in the future, Len’s great-great-grandchildren (Derek’s great grandchildren and Jason’s grandchildren) will continue the tradition of attending camp at Frontier.