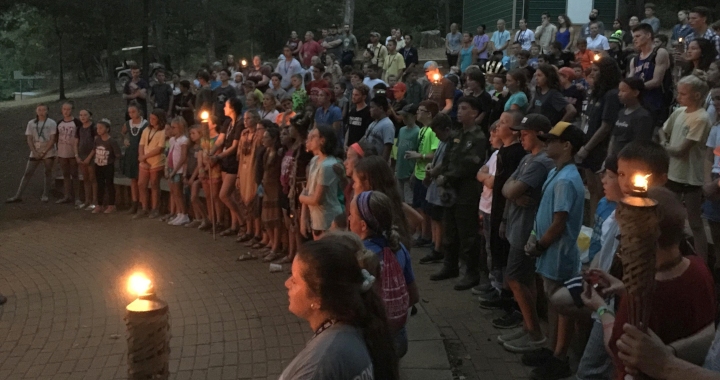 Each Friday we have been telling stories around the social media campfire about how Frontier Camp has impacted lives. This Friday, we turn the tables to look at THE STORY that impacted lives, or you might say was the very impetus to even have a place like Frontier Camp.

That story is of the resurrection. In each of the four gospels we read that Jesus Christ was crucified but did not stay dead, He rose from the grave! In fact, there were over 500 witnesses who saw the risen Christ. Many of them willingly went to their death because they would not renounce Jesus. Would they have done that for a lie? A con? For the world’s first CPR?

In 1 Corinthians Paul tells us:

“If there is no resurrection of the dead, then not even Christ has been raised. And if Christ has not been raised, our preaching is useless and so is your faith.” – 1 Corinthians 15:13-14

Frontier Camp exists for one reason: to tell the story of Jesus and what He has done for you and for me. FC has been doing that for 50 years.

And just what is that story? The story starts with some bad news: you, me, and everyone on earth are sinners and thus condemned to be separated from our Creator God. Even the atheist who does not believe in God has an inherent sense of right and wrong. Just try stealing their wallet. “Hey, that’s mine, give it back.” Why? Because even after millennia of the sin nature affecting man and creation, there is still an imprint left on us by God who created us in His image.

If the story ended there, it would be hopeless. However, the central message of the Bible points us to hope. In the Old Testament, God set up a sacrificial system where animals without defect were slaughtered.  Priests could step in and sprinkle people with the blood to cover sin. But, this process had to happen again and again. Prophets continually called people to right living before God and let them know that a deliverer, a Chosen One, was coming.

Finally, 2,000 years ago this Chosen One appeared and His name was Jesus. He was born of a virgin meaning that He did not come into the world with this sin problem. And, He lived a perfect life, making Him the ultimate unblemished lamb fit for a once-and-for-all sacrifice for all mankind. He willingly laid down His life which ended in a gruesome death on a Roman cross. This Son of God then was put into a grave which was covered up with a stone. That was on a Friday. We remember that act on this day which we call “Good.” The Romans and Jews thought they had done good too when they put this “troublemaker” to death.

Oh, but there was Sunday. Early that morning several awoke to see that this stone was rolled away and the guarded tomb was empty. Jesus Christ had risen from the dead!

“But Christ has indeed been raised from the dead, the first fruits of those who have fallen asleep. For since death came through a man, the resurrection of the dead comes also through a man. For as in Adam all die, so in Christ all will be made alive.”  -1 Corinthians 15:20-22

This story of Jesus has been told at Frontier Camp for 50 years. It is a true story. Good Friday and resurrection Sunday is the reason Frontier Camp has Friday stories. Thank you for being a part of those stories over these five decades. Thank you for helping write the next generation’s stories until the final chapter of this fabulous Jesus story is told…He is coming back…