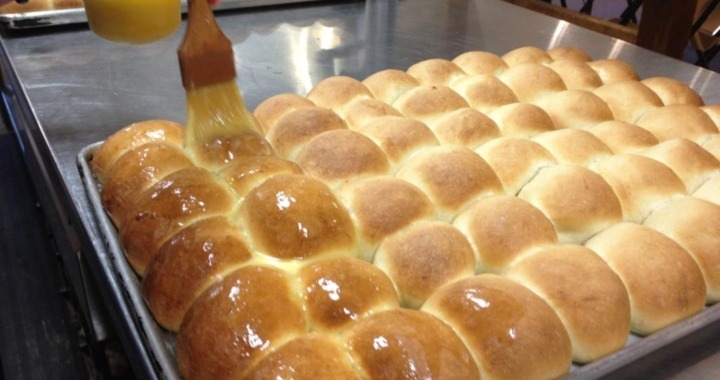 Today’s Friday story is our final installment of our Faith, Fun, Friends, and Food series.  As were the other installments, Food was written by guest blogger, Kate Humes.

Fill Us Up:  Food at Frontier Camp

Anyone familiar with Frontier Camp’s weekly summer schedule knows it is full and eventful. Words not often found in the FC summer camp vocabulary are “relaxation” and “leisure”.  The campers and staff stay super busy with daily activities, Bible drama, Trading Post (TP), night games, and Bonus Activity Time. All this activity requires ample sustenance. Frontier Camp’s motto, “Faith, Fun, Friends,” underwent unofficial modification some years ago. The result: “Faith, Fun, Friends, Food.” Maybe one reason Food tacks neatly onto the end is because camp has signature, mouth-watering meals (chess cake, spicy sausage pasta, breakfast burritos . . . hungry yet?); but why group Food alongside things as priceless as Faith and Friends? (Arguably Fun is a necessary summer camp component, and Faith, Frivolity, Friends doesn’t roll off the tongue quite as well.)

I served three summers in the camp kitchen, as well as working retreats between summers. Food makes or breaks someone’s day; good, hearty meals book-ending a camper’s or staffer’s day satisfies their empty belly and eases their overactive mind. A poor meal can make a camper or guest irritable, grumpy or unhappy.

Food is an important tradition at Frontier Camp. Smelling a favorite dish wafting through the dining hall encourages a stampede of hungry, smiling faces. Churros are a popular favorite, and an unnamed sister of mine once successfully ate eleven.

I wouldn’t advise getting one’s cholesterol levels checked immediately after serving a full summer.  But there is something notable about the many comments FC receives concerning its quality food.  It’s great to see the smiling faces as they come back for seconds of our mouth-watering chocolate sheet cake or homemade rolls.

For Frontier Camp’s 40th anniversary in 2009, camp’s long-used recipes were compiled into a cookbook. People can’t get enough camp food over the summer, making a home-use cookbook compulsory. The General Store at camp may still have a few copies.

But how does food relate to spreading the gospel or kids getting saved? The Bible references food so many times that an exhaustive catalog would be overwhelming. Food is necessary, but Jesus said that man shall not live by bread alone. When Jesus asked Peter if he loved him, Peter replied, “Yes, Lord; you know that I love you.” Jesus’ response was “Feed my lambs.” A second time Jesus repeated the question, and Peter responded the same. Jesus then said, “Tend my sheep.” The third time Peter again said “Yes, Lord.” Jesus’ final response was “Feed my sheep.” Jesus wasn’t talking about actual food or actual sheep here but he was asking Peter to teach the truths about God to Jews. It is interesting that food figures prominently into Jesus’ analogies and parables as He taught.

Can we expect hungry children to receive the bread of life? Can we expect staffers to share Jesus’ love empty-bellied? Jesus asked his disciples to meet people’s physical needs before their spiritual needs. Effective biblical witness occurs either during or after a meal or when the disciples and Jesus break bread together.

Food revives people’s minds and bodies and diverts attention from the physical so that we can better feed spiritually. Frontier Camp’s cooks meet the staffers’ and campers’ physical needs so that both are prepared to receive God’s word. (It is no accident that Bible drama and chapel immediately follows lunch and a nap.)

The camp kitchen can sometimes be a discouraging enterprise. Meals don’t always turn out properly, cooks constantly smell like some uncooked meat or pasta, and they interact less frequently with the campers than they would like. Despite the stresses and discouragements, cooking at camp is a beautiful, rewarding experience. Cooks see each camper and staffer three times a day and even form special relationships with the people who have dietary restrictions or that camper or staffer who comes back for seconds, thirds and so on! Cooks are able to do small things that ease other staffers’ stresses and burdens.

It’s 5 a.m. Despite it being July in Texas, I put on a jacket, anticipating both the chilly kitchen and getting buttermilk from the walk-in refrigerator. Quickly dressing (OSHA-approved closed toed shoes, two French braids), I walk the short distance from the girl’s staff cabins to the dining hall, entering through the back gate rather than the glass doors. All is quiet and dark: the heat isn’t yet unbearable, and the kitchen not yet cluttered. It is Tuesday morning: biscuit day.

Making biscuits is a weekly ritual: there is a repetitive monotony to it.  But I found my most sincere prayers were said spooning Crisco into Papa Bear (the large mixer) or gently patting out dough rounds. As a Head Cook, I made biscuits every week, partly because I didn’t trust anyone else to make soft, flaky breakfast bread, partly because I needed an hour alone to pray. Kneading dough provided my needed time with my Father. Praying over each person who would take a biscuit, I asked that, as it filled their bellies, He would fill their spirits. This was camp’s communion.

Frontier Camp’s meals are more than a primordial necessity; it encourages fellowship, fills our stomachs, and fosters friendships.

Now let us go break bread (or biscuits) together and be filled…ideally in one of the Frontier Camp Dining Halls!