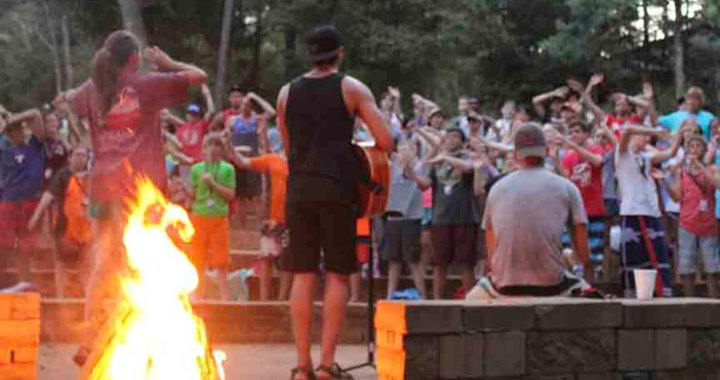 By Matt RainesMay 31, 2019No Comments
This edition of Friday stories coincides with the eve of FC welcoming the first campers of Summer 2019. The subject of the article is prayer.  It is our hope that, when you read about former FC counselor Kay (Haas) Olson who prays frequently for the camp and staff from her faraway land (Illinois), you will be encouraged and prompted to pray for FC from your neck of the woods.

Have you ever discovered that you and a new acquaintance have a mutual friend? I love networking and making connections. When networking presents itself in Christian circles, I believe this is an example of God at work in our lives. I recently had a conversation with my parents (Bill and Marilyn Haas) about how they were introduced to the Frontier Camp family in the 1970s. God used people to influence them.  He was already at work preparing their hearts for future chapters of their lives as a couple.

When I was in high school my dad was serving as Manager of Lakeview Baptist Assembly in Lone Star, TX. He suggested that I consider working at a different camp so I could broaden my horizons. He was speaking of Frontier Camp!

Entering the scene at an older age than most Counselors-in- Leadership-Training, I still participated in the training.  I even worked a few extra weeks in the dish room one summer.   I wanted to get familiar with FC and how it operated. The next summer I returned and took on a Senior Counselor role. Over those two summers I had the opportunity to connect with people I knew and others who knew me or my family from “the early years” of my life and the camp’s existence. I also got to make new connections with staff and campers.  I used “snail mail” to keep in touch with some after camp was done that summer.

A few summers later I found that my thoughts often drifted back to camp. I decided to pray for those who were continuing the work there, as often as I thought about Frontier Camp. Considering what day of the week it was, what time it was and how many weeks into summer we were, I would pray very specifically, based on my understanding of the schedule and my own experiences there. I knew how important that after-lunch rest time was when I was a counselor. And I remembered how crucial it was to make arrangements for a ride to town to do laundry over the weekend. I recalled the anticipation of meeting the incoming campers and their parents on Sunday afternoons. I also knew how many drink spills could require attention in the course of a single meal.

A few years ago I reached out to the camp to see if there were any specific prayer requests as spring warmed into summer. I remember reading in 2014 that the long-time camp nurse, Estella Brown, had passed away.  And I knew that she had been a serious upholder of the camp in prayer. I had recently crossed paths with a former camper of mine on the camp’s Facebook page.  After sharing my concerns about continuing prayer coverage for the camp, I noticed the creation of a Frontier Camp Prayer Warriors group on Facebook. What a great tool! Now I could easily keep track of prayer needs and join others in lifting them up to the Lord. I also discovered the camp’s blog (https://frontiercamp.org/blog/ ) often had great indications of camp concerns I could lift up in prayer

Even though I have lived northwest of Chicago, IL since 1992, far away from Frontier Camp, I continue to pray for the staff and counselors each summer. Occasionally, I touch base just to let them know they are not forgotten. I try to notice the weather forecasts for East Texas and pray accordingly if it seems there may have been some serious weather nearby. Sometimes my prayers are for general things like for each of the youngest first-time campers to enjoy his or her time at camp. Other times I am aware of very specific things like a counselor who is sick or a building project that requires funding by a certain date.

I would like to encourage you to join me in praying for Frontier Camp. Any time, from any location, from any perspective. Consider FC to be that mutual friend who connects us as we join forces in prayer on the camp’s behalf.

Here is a great passage to memorize and meditate on when it comes to praying for camp staff or campers.  It actually fits when praying for anyone.

“For this reason, since the day we heard about you, we have not stopped praying for you. We continually ask God to fill you with the knowledge of His will through all the wisdom and understanding that the Spirit gives, so that you may live a life worthy of the Lord and please Him in every way: bearing fruit in every good work, growing in the knowledge of God, being strengthened with all power according to His glorious might so that you may have great endurance and patience”  Colossians 1:9-11 NIV 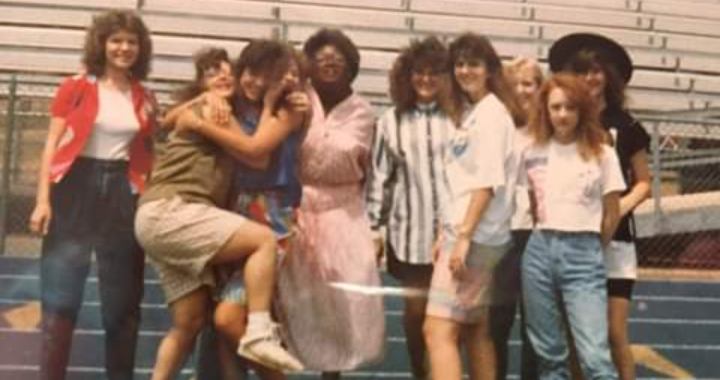 (Kay is pictured above, far left, at about the same time she served on staff at FC.  Another throwback to those days – her nickname at FC was “Chaos” since her name was Kay Haas!)

Missing summer yet? It's easy to sign up: my.front

Need some camp before summer? We do retreats, too!