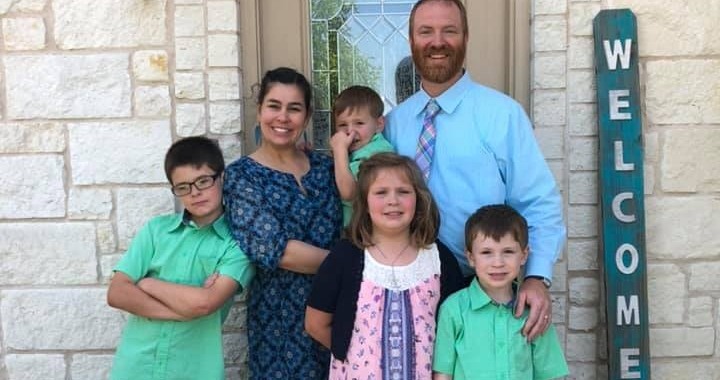 A 12-year-old boy accepted Christ after a concert at a Christian camp.  It’s a fairly common occurrence, but Jeremy Franks’ story doesn’t end there.

He grew up going to Grace Bible Church in Grapeland, just down the gravel road from Frontier Camp.  As a child, Jeremy was blessed with some opportunities to fill in for a camper who was unable to attend the week-long adventure at Frontier Camp.  “There were a few times when someone paid to go to camp but couldn’t make it.  So my brother and I were able to go,” he recalled.

Wes Woodard was the camp director at the time and also served as Jeremy’s Sunday school teacher. Wes always invited the church congregation to a concert at the end of Frontier Camp’s Teen Week. So the Franks family went to see the concert – a band called Harvest – and the experience was a turning point in the young man’s life.

“At the end they gave an invitation to accept the Lord,” Jeremy recalled. “The Lord was speaking to me, but when God speaks, so does the devil. He was telling me, ‘You’re not even a camper here. Your parents don’t want to wait on you.’ So I didn’t go forward. On the way home God was still working on me and in the back of the car I accepted Christ as my Lord and Savior.”

As a longtime camper and later counselor, Jeremy fell in love with the atmosphere, the people, the fellowship and the activities at Frontier Camp.  “There’s no place like camp,” he says, a sentiment shared by many who have worked there. “Frontier Camp played a huge role in my life.”

“I was a very shy kid,” he added. “I could barely talk in front of a group of my friends. Camp was really a place for me to grow out of that. At the last campfire of the week we were asked to give our testimonies.  That was good practice for me.”

He was baptized at Frontier Camp – choosing Houston County Lake over the alternative, a horse trough at his church.

At 18 years old, during his senior year of high school, Jeremy attended a revival at his church and asked God for guidance.  “I knew I was going to go to college but I didn’t know what to study,” he said. “Everyone said, ‘You don’t need to know what you want to do.’ I hated that. Toward the end of the revival, I was praying, ‘God, what do you want me to do?’ He said, ‘Just trust me.’ I knew that was Him calling me toward the ministry. I went down and surrendered my life to the ministry.”

After earning degrees at Sam Houston State University – where he met his wife Anna – and Southwest Baptist Theological Seminary, Jeremy became a pastor. He now leads a congregation of about 90 people every Sunday at Fellowship Baptist Church in Morgan’s Point Resort near Temple.

But it all began for Jeremy, now 37, at Frontier Camp.

“I’d never really led Bible studies before,” he said. “It was training. The first time I led anybody to the Lord was at camp. His name was David. I gained experience and confidence. I remember Wes asking me to lead one of the devotions at the campfire. That was my first experience doing a lot of that stuff. I can look back and see how God was beginning to bring me to where I needed to be and who I am today.”

And while the activities are a draw – Jeremy taught mountain biking, waterskiing, wakeboarding, “pretty much everything” while at camp – it was the friendships that brought him back. In fact he still logs into an online meeting once a month with a group of pastors that includes former Frontier Camp staff member Stuart Sanders.

“Some of the friendships I made at camp have lasted longer than the ones I made in college,” he said. “You’re surrounded by a bunch of other people who love the Lord and love these kids. When you share the same priorities in life, that’s different than just hanging out and having fun. Working at camp is a lot like being on a summer-long mission trip.”

The eldest two of Jeremy and Anna’s four children will attend Frontier Camp this summer.

And their dad has plenty of stories to share. He was heavily influenced by George Rutenbar, a retired evangelist from Waxahachie.  He spoke to staff and led devotions and worship before the campers arrived.

“I will remember George Rutenbar until the day I die,” Jeremy said. “He was a really neat guy. He played in the minor leagues with Mickey Mantle. By his estimate he had over 250,000 baseball cards. He’d been on mission trips all over the world. He had all this ornate pottery that he’d gotten from different tribes on mission trips. So much of his life was about Jesus. He made a big impact on me.”

Jeremy has dozens of camp memories – some good, some not so good. He once found a snake in the men’s shower house, drove a boat through a lightning storm during a staff trip in Oklahoma and heard the Columbia space shuttle explode over East Texas while he was washing dishes in the camp kitchen. But what first comes to mind is the time spent singing praise and worship songs with his friends and sharing Christ with kids.

He loved the kids, even if that love didn’t always feel reciprocated. At the end of one summer, another staffer shared a letter from one of Jeremy’s campers.

“I didn’t think [the camper] listened or heard anything or got anything from [his week at camp],” Franks recalled.

But the letter said otherwise. The young man wrote about how much he loved camp and accepted the Lord there.

“He specifically mentioned me and another counselor and how our devotions meant so much to him,” Jeremy said. “That was a great lesson that has stuck with me all of my life. We might never see the fruit that comes from what we do.”

A scripture that sums up the young pastor’s feelings about Frontier Camp is Colossians 1: 28-29: “He is the one we proclaim, admonishing and teaching everyone with all wisdom, so that we may present everyone fully mature in Christ. To this end I strenuously contend with all the energy Christ so powerfully works in me.”

“That would definitely apply to camp,” he said. “That was the reason we were there. There were other places where I could have earned money or built friendships. At camp, I knew what we were there to do. We were there to share the gospel with those kids.”