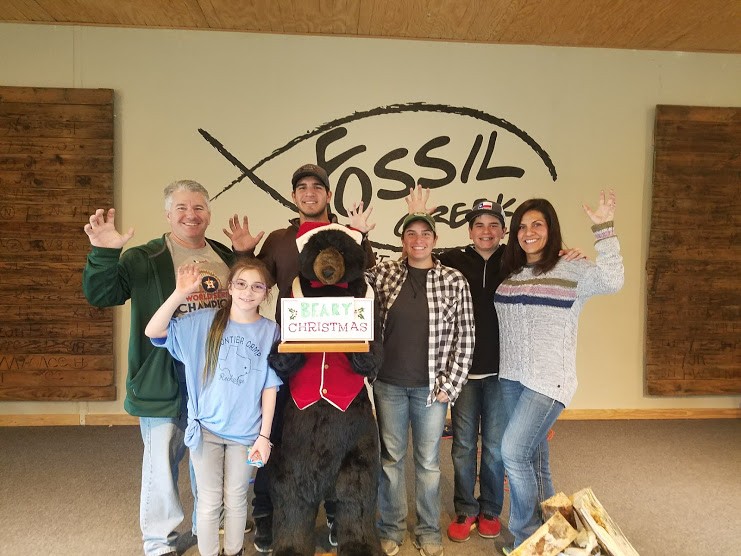 ‘The Holy Spirit was there’

Fabi Richards and her husband, Marcus, were a little skeptical when their 8-year-old daughter won a free week at Frontier Camp.

“They didn’t have camp or [Vacation Bible School] or anything at my church growing up,” Fabi said. “The only summer camp I’d ever heard of was in ‘Parent Trap’ with Hayley Mills.”

Kendy, the 8-year-old who is now a 22-year-old graduate of Baylor University, pooled all her Awana bucks to bid on the trip to camp.

“I said to my husband, ‘Does she know this is a whole week?’” Fabi recalled. “She outbid everyone.  I don’t think it really hit her until we were packing and getting ready and we drove off.”

Kendy got homesick that first week away from her family. But by the following summer, she wanted to go back to Frontier Camp.

“We had never been there,” Fabi explained. “At that time, we were struggling financially. The fact that she got that free week at camp was like, ‘Wow, we won the lottery.’  I remember thinking, ‘Am I going to be able to leave her there?’  I dropped her off and we talked to the counselors. The Holy Spirit was there and He was going to protect my child. I remember thinking, ‘What’s wrong with me? I’m not anxious. I’m not scared. I’m not worried.’ It was a peace that was beyond human understanding. When I dropped her off, I did not know a single soul at that camp.  But I knew it was a safe place.”

Fabi, Marcus, and Kendy’s siblings were able to keep up with Kendy through pictures and videos posted on the Frontier Camp website – a luxury that wasn’t available to the parents of campers in the early 1980s.

“She looked so happy,” Fabi said. “We could tell she was having a great time.”

While parents can get updates on their kids via FC’s website, campers aren’t allowed to use electronics.

“I think it’s good to get away and connect with the Lord,” Fabi said. “For my kids, it has helped them detach from the world and ask, ‘Who am I in Christ?’ and ‘What does God want me to do?’ all while being surrounded by friends.”

Ultimately, Kendy’s siblings, Kiernan (19), Kobe (14), and Kylee (10), each followed in their big sister’s footsteps. They have attended home school camp, which is the same week each year.  And they’ve made friends that they look forward to seeing every summer.

“It’s like a family reunion. They’ve grown up going to Frontier Camp,” Fabi said.  She also noted that she and her husband have attended mother-daughter and father-son retreats.

“If (FC) did the Ladies’ Getaway for a whole week, I would be there,” she added.  She explained that a group of friends from her home school group near Houston have filled up a whole cabin the last few years at the women’s retreat.

The Richards family became staunch promoters of the Christian camp – without even trying.  “My kids would come back talking about camp and other kids would want to go,” Fabi said. “My son is at teen camp, and every single one of those kids in his cabin is there because my son came home and talked about it. There are two kids that he doesn’t really know, but because he invited his friends, they invited their friends.”

At one time, there was a mother-son retreat at camp that filled a need not commonly offered, Fabi said. The logistics were a little challenging, as staff had to be hired to stay with the boys in a separate cabin from their mothers, but it was a special experience for Fabi and her son.

“I feel like my relationship with my children has grown because of the time I’ve taken just to be with them,” she said. “The fact that Frontier Camp facilitates it makes it so much easier to take that time with my kids.”

“Summer Camp Director, Hans Meinardus, has a gift of teaching and connecting with campers and their parents about creation,” Fabi added.  “He’s not just telling you, ‘God is our Creator.’ He’s so knowledgeable scientifically that the kids come back a little more armed and with a little more ammo,” she said. “God will use it somehow, some way, throughout the year in conversations my kids have with others.”

Frontier Camp’s Recharge program, a Bible study lesson mailed to the camper throughout the school year when they’re not at camp, has also been instrumental for the Richards family. When youth complete a lesson and mail it in with the study questions answered, they receive the next lesson, along with an encouraging note from the Recharge coordinator.  “The fact that my kids are being spiritually mentored by someone at camp throughout the year is priceless,” Fabi said.

After having several positive experiences at the camp in Grapeland, the Richards family educated themselves on camp fundraisers and got involved, getting to know the camp staff on a personal level along the way.

“We’re in a totally different situation where God’s been good, and financially we are comfortable now,” Fabi said. “Because of that, the way I see it is we are blessed in order to be a blessing, whether it’s financially or with the spiritual gifts that God has blessed us with. The reason my oldest went to camp that first year was because she was able to attend for free because someone gave to make that scholarship possible. The return for Frontier Camp has been great because someone donated one week back in 2005 to the Awana program.”

She said that occasionally her family talks about what they’d do with the money if they actually did win the lottery.  “Every single time, Frontier Camp is on the list,” she said. “There are several ministries that we’re involved in, and of course our local church, but there’s something special about Frontier Camp. You see the good that is being done for the kingdom.”