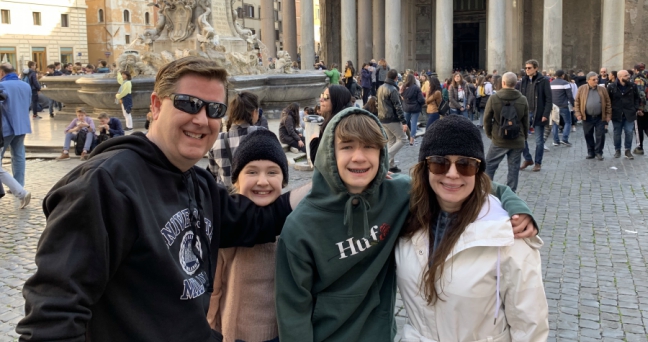 By Matt RainesApril 5, 2019No Comments

Consistency: that steadfast adherence to the very same principles time and time again. Leaders know that with a commitment to consistency, you can influence greatly. Like a bubbling stream slipping quietly over a rock’s edge, given enough time the effect is striking. The consistent flow of water changes the rock, creating a channel where there was once only smooth stone.

This is the story of a family influenced, then influenced again decades later by the consistency of the summer camp ministry of Frontier Camp.

When Bob Borden was a kid growing up in Bellaire, Texas, going to church was one of those things he did regularly with his family. But regularity has a way of becoming routine and routine often falls into formality, the same people, the same building, the same teacher, every week, week after week. After a while Bob was no longer engaged and much of what was taught wasn’t caught. As a 10-year-old boy, Bob craved excitement, adventure and new discoveries. Sadly, Bob’s Christian experience wasn’t rising up to that standard.

But Frontier Camp changed all that.

In 1982 Bob’s parents sent him to Frontier. Camp became Bob’s new world, just waiting to be discovered. In Bob’s week of camp he discovered the excitement and adventure he was craving. He experienced the thrill that comes with new-found independence. He was on his own, away from home but he felt secure and accepted. With his parents nowhere around he was free to make some decisions on his own. He was able to decide for himself how he wanted to spend his free time every afternoon.

Bob’s new world started to revolve around the lake. He learned to water ski early in the week and it quickly became a time he looked forward to each day. Learning the new skill was incredibly fulfilling for Bob.  He discovered something he was good at and something others admired him for.

At the end of each day, Bob loved the stories told round the campfire. It was in those stories that the Bible came alive with a whole new freshness. Even though he’d heard many of the stories before, they took on new meaning while sitting around the fire with the vast array of stars scattered overhead.

Not only was camp a place of discovery, it was a place of heightened sensitivity. Even the most mundane things became full of awe and wonder. It was like Dorothy in the Wizard of Oz, stepping from the black and white world of Kansas into the Technicolor world of Oz.

The old familiar routines of home, school and church gave way to the new activities of camp. Raising the flag before breakfast, hanging out with the guys in the cabin, spending afternoons at the lake or on horseback (another new experience), and evenings around the fire listening to the Bible come alive became an all new routine for Bob. These transformative new experiences were full of new revelation. Bob didn’t yet realize it but he was becoming a whole new person.

Summer camp 1982 was repeated in 1983 and again in 1984. In those three short seasons, Frontier had made its indelible mark on Bob’s life. He had grown and now viewed God differently, he viewed church differently. Bob’s experience at Frontier had changed his whole perspective on life.

Over those three summers, the Frontier experience had awakened something in Bob he didn’t even know was there.  It was a spiritual awareness. Because of camp, God had become more than just someone he could learn about. God became real, someone he could have a daily relationship with. Being away from home Bob began to see and experience everything in a brand new light. Away from the familiar, away from the known, even away from parents Bob began to see things for himself. He had become his own person.

The years went by and Bob grew up.  He graduated from school, got married and had children of his own, Robert III and Sara. Bob hoped that someday, when Robert and Sara were ready, summer camp would become an important part of their lives as well.

When the children were old enough, Bob and his wife, Heidi, sent the kids to a camp Bob had heard of but had never been to. The kids’ camp experience that week proved to be a good one but seemed to lack the impact that Bob remembered from his own experience. Bob thought of Frontier and wondered…why not send the kids there?

After talking with Heidi, the decision was made. The next summer, Robert would follow in his dad’s footsteps and attend Frontier Camp.

Taking Robert to camp was a surreal experience for Bob. Driving those same old roads all the memories of going to camp as a kid came flooding back. In a way, it was like going back home again, going back to his spiritual roots. Bob whispered a quick prayer that Frontier hadn’t changed. He wanted his son to have the same great camp experience he’d had as a kid.

God answered Bob’s prayer. As it turned out, Robert fell in love with Frontier, just like his father prayed he would. When Robert got in the car after camp, his mouth was moving a mile a minute recalling all those great experiences of the week. In fact, the things Robert loved most about camp, the water skiing and wake boarding at the lake and the great Bible stories around the campfire, were the same things that had impacted Bob so much all those years ago. Bob was so grateful to have a whole new connection with his son about shared camp experiences separated by 30 years.

Robert’s experience was such a positive one that Bob and Heidi decided to send Robert’s little sister, Sara, to Frontier the next summer. As expected, camp made an impact on both Robert and Sara. The kids sang camp songs at the top of their voices all the way home…and they kept singing them for weeks afterward. They still talk and laugh about the same things Bob came home from camp talking and laughing about 30 years before.