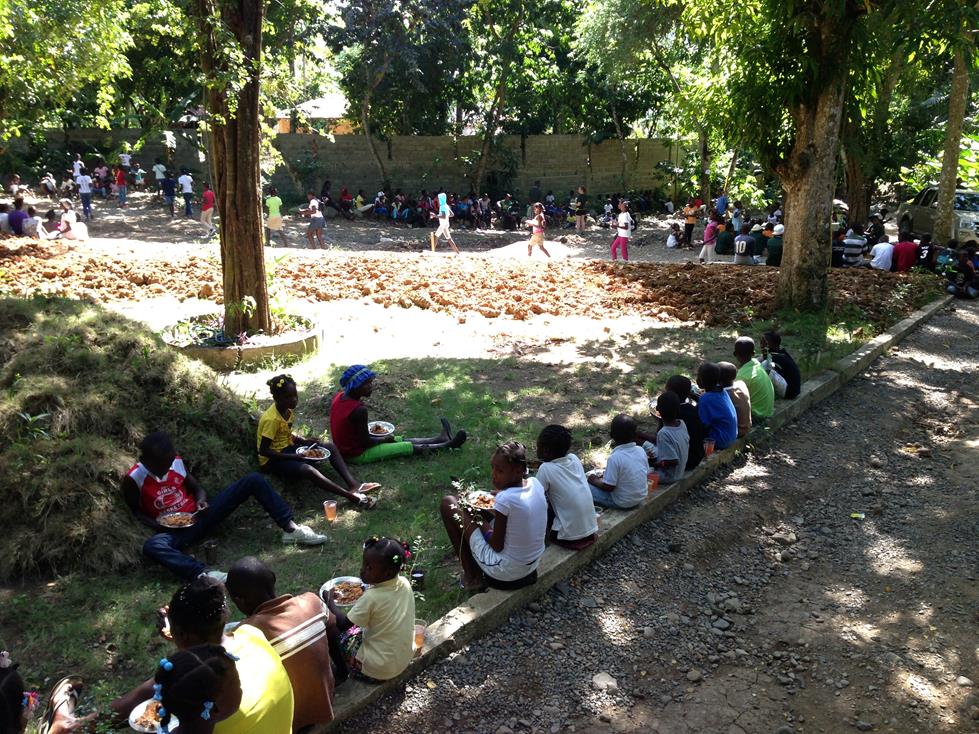 Howdy from the Jacob’s Well Ministry Center outside of Limbe’ in Northern Haiti. It is a balmy 75 degrees here with a gentle breeze blowing and we are relaxing after a long but productive day that has been capped by a great dinner (rice with a delicious goat meat stew and bean sauce on top) followed by a devotion time in Ezra chapter 2. All of the team is in good health and great spirits – thanks so much for your continued prayers on our behalf. We have an early morning tomorrow as final preparations for camper arrivals will need to be completed. I will attempt to give you a brief but comprehensive overview of a very busy day and leave you with some items to keep in your prayers tomorrow.

Breakfast this morning consisted of toast, mamba, grapefruit jelly, pates’ and a type of oatmeal called AK100 – sweet with a vanilla taste. The team reported a more restful night having acclimated to the night sounds of dogs barking, the ubiquitous roosters trying to get the sun to come up at all hours of the night, and even the occasional hint of drumming in the far distance. After breakfast we continued with work projects. The drama team started practicing the story of Jonah, with Tomas Johnson in the lead role. Other notables include Ben Butler in the role of the King of Nineveh, and Lawton Klein as Jesus (in the telling of the unmerciful servant as played by Johnny Larson – a parable we are using to illustrate this OT story). Sophie Johnson plays the worm that ate Jonah’s shade plant. Other teams found and washed things that we needed like hand washing buckets and marshmallow skewers. Jack and Robert continued working on the electrical investigation which included more site mapping and using trigonometry to estimate the elevation difference between the station and the antenna tower on the mountain. Dan Wales continued to smooth things out in the radio and TV station. Lisa has been documenting our efforts.

Shortly after 10:30AM the Haitian staff assembled for training. They sang some worship songs and then we made counselor assignments. Most are veterans, and there was good discussion on how to make the camper check-in procedures smoother. Tomorrow will tell if those changes will be instituted in a way that makes the process faster. We then all ate lunch together, and over the course of the meal the language and cultural barriers were bridged largely with the help of markers and paper to write on. Spontaneous singing erupted, with the Haitians singing (and dancing) a spiritual song and then asking us to sing one in turn, alternating over several numbers. We sang camp favorites “I’ve got a river of life” and “There’s a fire on the mountain”, and then we corporately ended with “This is the day”, Holy, Holy, Holy, and “Alleluia” in both English and Creole. It was an amazingly worshipful time that brought us together as brothers and sisters in Christ!

After lunch we took a camp tour of all of the activities with Pastor Gersan Valcin translating for us. There was much hooting and hollering as we shot BB guns, archery, and practiced nine-square in the air. One new addition this year is a low ropes activity, with several initiatives, including a version of Texas skis all produced by Elizabeth Valcin and Jan Johnson. Allie McDonald and Abigail demonstrated the making of the rubber band and button bracelets we will be making this year. Autumn led a team putting together snacks, and washing things like campers di