Today we woke up and had eggs, toast, peanut butter, and passion fruit punch for breakfast. YUM! As the “mobile camp” (aka “VBS”, “E-Z camp”, “Pop-up camp”, “Camp-to-go”, “Barrel of fun camp”…) pulled out in the tap-tap, the kids streamed in the gate and had their last two camp activities. The Bible drama consisted of the second anointing and crowning of King David. All the kids laughed when David (Nathan, for the second time) was anointed, by Beth pouring a water bottle on his face. Directly following the drama, the kids had royal campfire. They recited the Bible verses they had learned over the last few days and sang songs. A couple of kids decided to give their lives to the Lord for the first time! Also, when asked who had given their lives to Jesus at Jacob’s Well in years past, almost everyone raised their hands! The kids received s’mores and glo-necklaces as they walked out the gate, and the counselors got water bottles with goodies in them.

Meanwhile, at mobile camp, the four activity periods went just as smoothly as the past two days. In between the morning and afternoon activities, the Haitians acted out the Bible drama, and there was lots of singing by all. Matt Raines, with the help of Gersan’s translation, preached the Gospel to the kids. A few of them stepped out of the church to talk to their counselors about receiving Christ afterwards. After a very heartfelt goodbye, with meaningful hugs, kind words, and tears, Matt came up again to speak. After his speech, all the Americans were somehow hoodwinked into dancing for the Haitians as they sang. Greta surprised everyone with her smooth moves. Camp Express tap-tapped it out back to Jacob’s Well as the kids ate the meal provided for them.

Back at camp, we had a very delicious lunch of meatballs, fried plantains, and rice. After lunch, some worked on the fence, some prepared for the wedding, and others went out to the field to play with kids. A game of soccer with the Haitian counselors ensued while the wedding rehearsal happened in another area of the field. Soon after, everyone just began to run around and play with kids until dusk.

As we caught up after the day at Jacob’s Well, a lot of the staff tried sugar cane for the first time. We then had an amazing dinner of noodles, goat meat, and soda. After dinner, we continued our study through 1 Samuel and the story of David and Saul led by Hans. We ended the evening enjoying each other’s company by playing cards and telling tales of our Frontier Camp adventures.

Thanks for all the support and prayers. 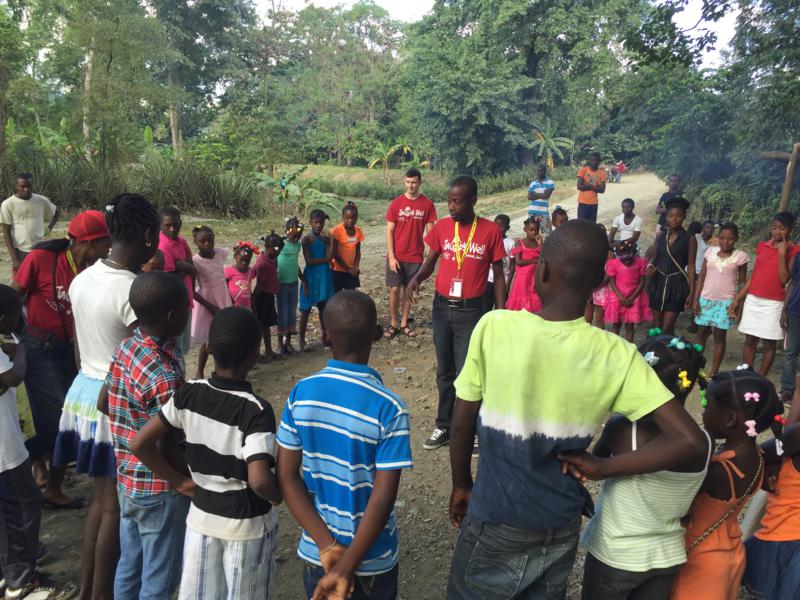