After 3 days of camp at Jacob’s Well and VBS in Latiro, the team was able to dedicate the day to projects at Jacob’s Well and preparing for the wedding. After a breakfast of toast, homemade peanut butter, delicious grapefruit jam, coffee, mango juice and hot cocoa and a devotion, we all headed out.

The work crew continued with the Jacob’s Well property line fence. The Haitian workers don’t like the electric concrete mixer, so that was quickly put away for their preferred method of mixing it on the ground!! Gersan negotiated the property line and the team dug holes and set posts for the metal fence. At one point we had 15 people working on the crew to transport concrete in 5 gallon buckets down a steep slope! Don Bertram continued faithfully and doggedly tracing down various electrical circuits that had problems. Lights that were shorted out, lost neutrals, and other gremlins in the system were systematically fixed here in the core of the campus. He also installed several new outdoor lights this week.

The wedding crew had lots to do! Greta and team iced the 3-tiered wedding cake, others cleaned the pavilion, while a few worked on floral arrangements using the plants on camp land. They became very resourceful and creative-no trips to Hobby Lobby! For example, anti-bacterial wipes containers were wrapped with fabrics strips and lace to make vases. Lights and tulle work wonders. Gersan was amazed at the pavilion’s transformation! A group of girls headed over the village field to decorate for the wedding. The arbor was carried over, chairs were set up, and the PA-system plugged in.

We all gathered for a quick lunch of beef, vegetable and dumpling stew and cheese bread.then back to work!

The setting for the wedding was a spectacular Haiti mountain backdrop. People began to gather…many people! This was the first wedding in the village so there was a lot of interest! In addition to at least 240 people who attended the wedding, many gathered to watch across the cactus fences along the perimeter of the field. Four pastors participated-2 Haitian and 2 American (Matt and Hans). There were two choirs who sang beautifully. After the ceremony, Jean-Claude and Noelle (the bride and groom) joined everyone at the maypole. Wow! What a cultural event! People 8 years to 80 years danced weaving the ropes around the maypole in AWANA t-shirts for uniforms. They played drums and blew horns made out of large wooden tubes. Those weaving the ropes on the maypole tapped sticks as they wove the ropes down the pole and back up. It was fascinating to watch.

Everyone made the short walk to Jacob’s Well for the reception. Cake and punch was served until we ran out of plates, forks and punch! People kept coming and, thankfully, more plates and drinks showed up. Wedding pictures were taken, the bride and groom enjoyed their bite of cake. The FC Team blew bubbles as they left the pavilion.

It didn’t take long for us to change into our more comfortable clothes. We relaxed for a while before another delicious meal was served–drumsticks and rice, bean sauce, cheesy squash casserole.

After dinner cleanup, Hans continued the study of David and announced exciting plans for tomorrow (beginning at 5 AM!)

We continue to enjoy God’s provision and blessings! Thanks for your prayers. 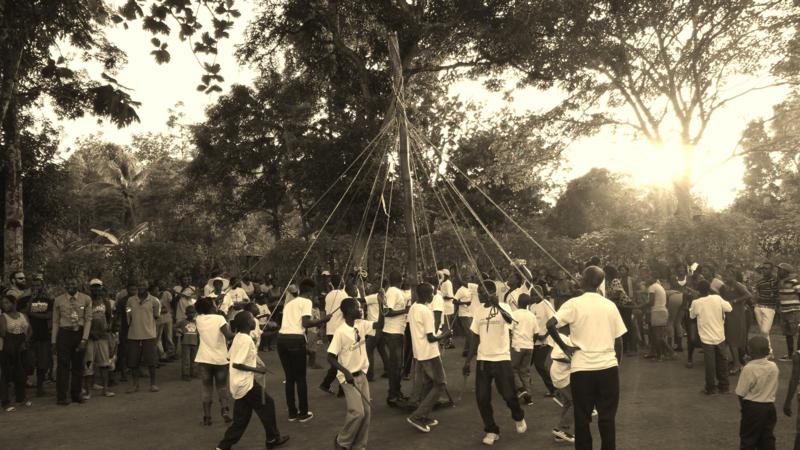