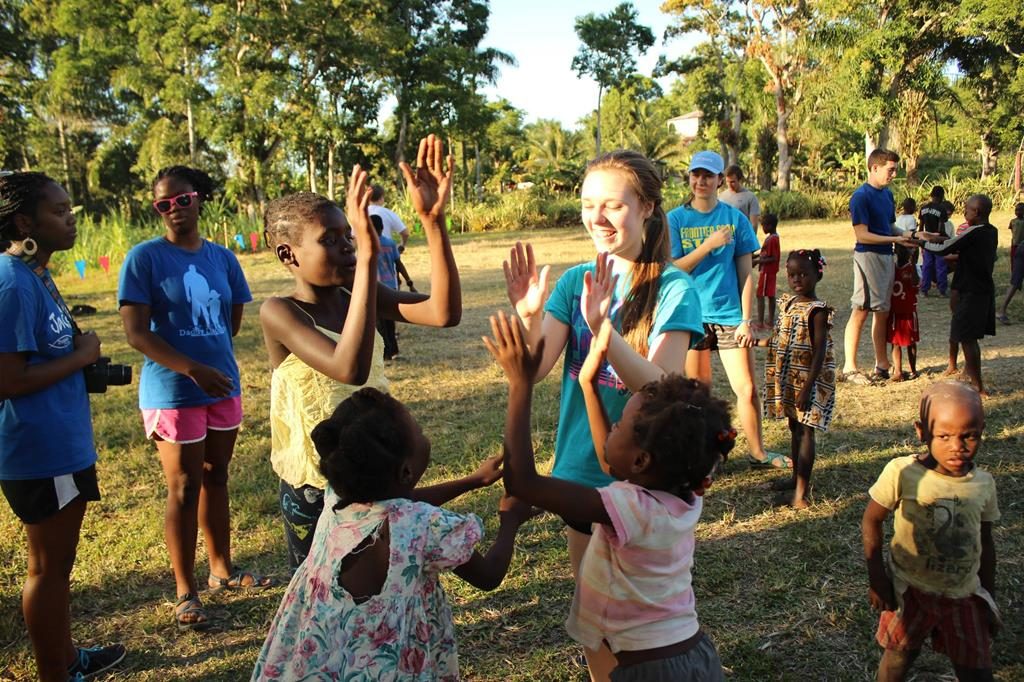 Early morning today, since it was the first day of camp! We woke up to the usual Haitian morning symphony of rural sounds in time for an amazing breakfast of oatmeal, coffee, hot chocolate, and toast before rushing off to prepare for the start of camp.

Dan and Api Wales arrived late last night from Port –au-Prince to join our team for the remainder of the trip. Api did a puppet show for the campers during their Bible Memory activity that explained the Gospel using the same concept as the Wordless Book, while Dan continued work on the radio station during the day. He also fixed our megaphone halfway through the day, saving the day … and Peter Marc’s voice!

As soon as breakfast was over, the drama team trekked up the hill to practice Bible Drama while the rest of the team prepared for the arrival of campers. Thankfully, just as our campers were arriving, the rest of the pieces for our new game 9 Square in the Air arrived too, giving us just enough time to set it up before activities. It turned out to be a big hit with the campers—they always love learning a new game! They also enjoyed camp staples such as riflery (with BB guns), archery, steal the bacon, and the ever-popular whiffleball!

After the first activity period in the morning, the whole camp marched up the hill for Bible Drama. We’re doing the story of Ruth and Boaz this year. The drama team pantomimed the story while Peter Marc, the Haitian program director, narrated the story in Creole. The campers love watching our team acting silly on stage. Afterwards, Peter Marc explained the “Big Idea” of the drama. One of the “Big Ideas” today was that Ruth and Boaz were faithful – great examples of good character in a time when no one else was following God.

Once drama was over, it was time for lunch. Due to a camper miscount (the kitchen was told we had 130 campers … when there were actually about 180), lunch ended up lasting over 2 hours before all of the campers were fed. But the Haitian “spicy” spaghetti was well worth the wait. And the campers were extremely patient and kept themselves entertained, playing in their “cabin” groups, memorizing verses that correspond with the drama, and getting to know our team.

We finished out the afternoon with two more activity periods, a second Bible Drama, and then waved “orevwa” to the campers for the evening. They’ll be back early tomorrow for another exciting day at camp.

Meanwhile, several of the guys continued work projects throughout the day, including a plumbing project that required shutting of the water in the girls’ bathroom all afternoon. They worked hard all day … finishing up after dinner just in time for the girls to enjoy hot showers.

We finished off the day with an awesome beef and potatoes dinner, followed by a cake to celebrate Will Joyner’s 21st birthday! Then we continued our devo out of Jeremiah (today there was a plot to kill him hatched by his own family). Afterwards it was up to the Attic (the hill behind Jacob’s Well) to look at the stars and then off to bed for another early start and an exciting day of camp tomorrow.

Please pray for camp tomorrow and for all of the campers who will be attending! We’re excited about this chance to love on them and share the Gospel with them.