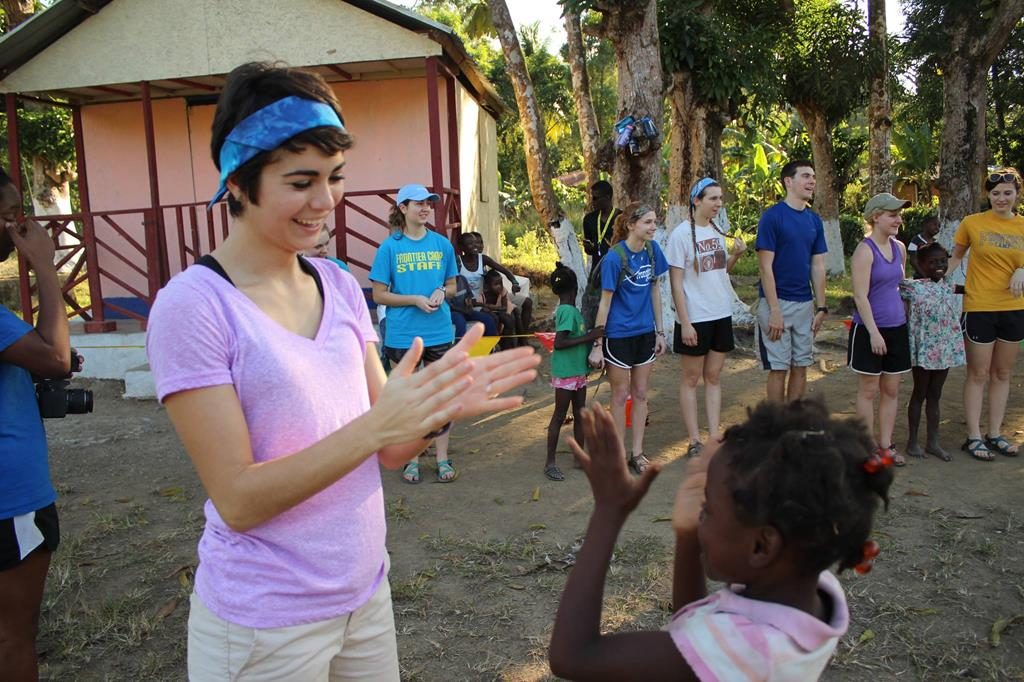 Sak Pase! (rough translation: “What’s up?”) What a blessing to have successfully ended another awesome week of camp here at Jacob’s Well!  The Lord has truly been at work here, and we have enjoyed a wonderful time of fellowship with our fellow Haitian campers and staff.

Well, the day started off with a scrumptious breakfast of Haitian soup, Mamba and white bread and of course, the delicious Jacob’s Well coffee.  Our team was not responsible for the Bible drama today, so we went straight to preparing for the day of camp, which included setting up for activities, making a few equipment repairs, and Gabe setting up two large bonfires for s’mores.  Gillian was busy beginning work on a large trench for burying an electrical line, and Konrad and Robert were busy running the big machinery.

Camp began very smoothly as the campers were accustomed to getting in the gate and to their assigned cabins so that activities could begin on time.  There were two activity periods in the morning followed by a Haitian drama of the miracles and crucifixion of Jesus.  The Haitians really get into acting, so the kiddos really enjoyed their portrayal of the Passion.

S’more time was, let’s just say a bit of…..CHAOS!!!!  Somehow, even though we made over 300 s’mores, and there are only 180 campers, we used every one of them…meaning that some kiddos are super sneaky.  It would be safe to add that we are already re-strategizing for next year’s event.  After the s’more extravaganza, the campers were given some delicious snack bag treats, and we said goodbye and waved to them as they went home.

After camp was over, several projects, large and small, ensued.  Small plumbing fixes, sound-booth construction for the radio station, trench digging, and burying electrical wiring were all worked on this afternoon following the departure of our Haitian campers.  Pretty much everyone on the team took a turn at the shovel or pick-axe at some interval during the day, as well as worked on other projects, such as making an inventory of our supplies left at the camp for next year. We learned that it is a bad idea to swing a pick-axe into a rock…ouch!

Dinner (served a little later due to work projects) was awesome. . . Alicia is such a great cook!  We enjoyed a Haitian Lasagna (MMMMMmmmmmmMMMM) and sodas.  After dinner, our friend amd translator, Franzie came and sold some paintings, bracelets and T-shirts.  Everyone enjoyed browsing through his wares, and some of us took the opportunity to take a quick shower

The devo tonight was on Jeremiah 18:1-12, and Hans taught us about the potter and the clay.  He challenged our team to become moldable clay in our Father’s hands.  He told us that our experience in Haiti could be compared to a class or lab, and that the real test would come when we returned back home to our familiar life, culture and surroundings.  He reminded us of the sovereignty of God and of the fact that to be good clay, we need to seek His will in our lives.  It was definitely a wonderful challenge at the end of our camp week and experience serving here in Haiti.

Well, as some of us were singing in the shower tonight, “so long, farewell, auf Wiedesehen goodnight. . .” (gotta love that Sound of Music).  Thank you for your prayers!  Goodnight all!

Will, Natalyn, and Audrey Joyner