Day two of camp was an exciting one! We started the day finishing preparations for the day’s crafts (cutting out pictures that the campers would color). Campers arrived around 8:30 a.m. Because check-in had happened the day before, we were able to start their cabin time more quickly than yesterday. During cabin time, the counselors went over the story of the day, today’s being Samuel, and showed the campers pictures to help explain the events.

After this, they transitioned to morning activities. At the Memory Verse station, the staff helped the campers memorize the key verse of the day. At Crafts, part of the campers colored a picture of Hannah holding Samuel, which folded up to look like a pair of praying hands.  The others put together a foam craft that had various stickers relating to faith and listening to God.

During this time, the other groups went to activities such as:
Archery, “Flèche” in Creole,
Riflery, “Fusil” in Creole,
Frisbee,
9 Square, “9 Carré” in Creole,
Steal the Bacon, “Voler le Cochon” in Creole

After morning activities, they transitioned into a large group Bible lesson up the hill. This time was then followed by lunch (delicious rice and chicken!). Once lunch was finished, it was time for more activities. The groups that hadn’t done Memory Verses and Crafts went to those stations, while the other groups rotated through the other various activities.

We hosted 224 campers, 3 more than yesterday. And the 8 year-old group had over 60 campers! The camp was full of kids until around 3:45 p.m. when they headed home for the night.

After they had left, we began finalizing the craft for tomorrow, the last day of camp. Tomorrow’s lesson will be on Jonah! Thankfully, we had much less trouble getting the craft picked and prepared, so we should be able to get plenty of sleep tonight! We cannot wait for tomorrow, but are saddened by the realization that it will be our last day of camp 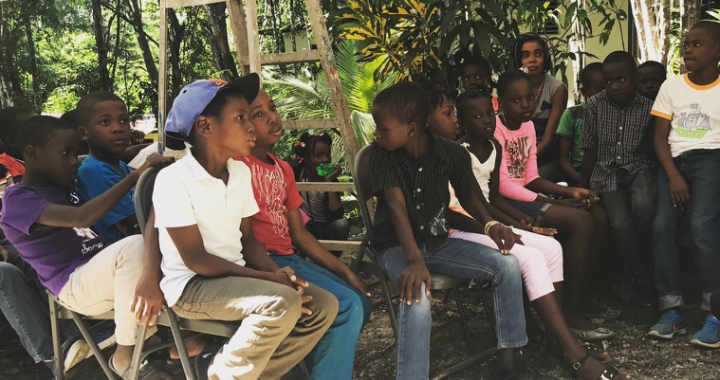