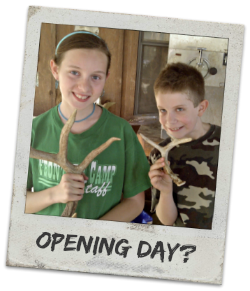 When I think of opening day, I think of a neatly mown outfield, full stands, hot dogs, the National Anthem and a fly-by. In short, I think of baseball when I hear the words, “opening day.” Now, if you mention those words to my kids, they think of getting up well before dawn, camo clothing, rifles, and licenses. That’s right, my kids don’t give much of a hoot about baseball, they love deer hunting.

I grew up in a non-hunting family, surrounded by non-hunting friends in a non-hunting town. However, my children are growing up in East Texas in a town that has to add an extra worker at the sports counter at Wal-Mart just to handle all the folks lining up for their annual hunting license. My son Will shot a 10 point buck when we was 11 years old. When I was eleven I was just hoping to earn 10 bucks mowing a neighbor’s yard. When my daughter was 12, she shot a doe so adroitly that she dropped in her tracks. When I was 12 the only shots I was taking were on a soccer goal.

Perspective. My children and I have different perspectives when it comes to our early experiences and surroundings. Perspective is what separated Elisha from his servant in a wonderful story in 2 Kings 6.

The efforts of the King of Aram were being thwarted by God’s prophet, Elisha. The king finally had enough and sent an army to surround the city where Elisha was staying.

When Elisha’s servant rose early in the morning, he awoke to a scene of a vast army with horses encompassing the city all poised to come and get Elisha. The servant was overcome and exclaimed, “Oh my lord, what shall we do?” Elisha responded calmly, “Don’t be afraid. Those who are with us are more than those who are with them.”

Perspective. Elisha’s servant could only see the temporal, the here and now. Thankfully, Elisha prayed for his servant, “O Lord, open his eyes so he may see.” The Bible then records that the Lord answered this prayer and the servant looked up and “saw the hills full of horses and chariots of fire all around Elisha.”

It would be an understatement to say that the servant’s perspective changed when he saw the Lord’s Army. After all, chariots of fire are always better than a plain ol’ Aramean chariot. The servant continued to marvel as Elisha corralled the entire army single-handedly after the Lord struck them with blindness. Hmmm, sounds like the army’s perspective changed too.

How’s your perspective at the moment? When you look out at the world in the morning, do you see that you’re surrounded? Or do you see chariots of fire, and with them the assurance that the Lord is in control?

If you see the former, you need a new perspective. Paul gives the recipe for perspective change in Romans 12:2, “Do not conform any longer to the pattern of this world, but be transformed by the renewing of your mind…” Reading and meditating on God’s Word will change your perspective. Do it daily.