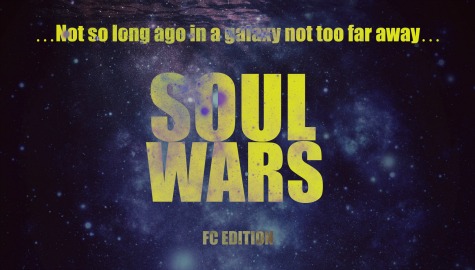 Episode I – A TIME OF INNOCENCE

In the beginning, God created the heavens and the earth. God created man in His image, male and female, He created them, and walked in perfect fellowship with His creation. God had one requirement of them – to eat of the tree of life, not of the tree of the knowledge of good and evil. Tempted by the evil Satan and lustfully desiring to become god-like himself, the man Adam rebelled against his Creator and ate of the forbidden fruit. In His righteousness, God provided a gracious sacrifice to atone for man’s sin, but the relationship was broken. Yet there was hope in the promised offspring of the woman.

Episode II – THE WAR OF CONSCIENCE

After man’s rebellion in Eden, the perfect Lord expelled man from His garden. The Creator now gave Adam’s sons a new requirement – to do good in the land and be governed by morality. Mankind would still need to have faith in God to please Him, and God would still graciously provide for their needs. Yet, man once again rebelled against his Creator, and the offspring of Adam became increasingly violent on the face of the earth. In all His creation, the Lord found one godly man – Noah, the herald of righteousness. Together with his family, Noah faithfully obeyed his Lord and constructed an ark of salvation. The Lord poured out His wrath upon the earth, and nothing outside the ark survived the great flood. But there was still hope for redemption in the promise to Eve …

After the global flood, God would rebuild His relationship with man through the offspring of Noah. This time, the Lord gave another requirement to them, to be fruitful and to fill the earth. And in order to help restrain the violence that comes from deep within the evil heart of man, He told them to govern themselves with one main rule, ‘whomever sheds man’s blood, by man shall his blood be shed. For in the image of God he made man.’ If man would just trust God, redemption and fellowship could be reinstituted. However, in just a few generations from Noah, mankind once again rebelled against their Creator in choosing to build their own way to heaven. The tower of Babel represented man’s collective pride and rebellion. Acting again in a way to show man his need for God’s mercy, the Lord created new languages and separated and scattered man across the planet. It was a desperate time for man…

With the human race divided into new groups and scattered across the earth, the Lord chose to make a special people to be His chosen messengers and servants to the world. The Lord called Abraham to travel across the wilderness to a new land that God would show him. Abraham received one promise from the Lord, that the world would be blessed through one of his descendants, the promised seed of Eve. All that the Lord required from Abraham and his descendants was to remain in the land, to trust in God alone, and to live justly and righteously. Abraham believed God, and it was reckoned to him as righteousness. But the evil Satan was still roaming the earth, looking to tempt God’s people into rebellion. Joseph, the favored son of Abraham’s grandson Jacob was sold into slavery by his own brothers, and declared to his father to be dead. Even the family of Abraham could not last long without succumbing to the evil of their hearts, and once again rebelling against the Lord. So, the Lord sold them into slavery in Egypt until the proper time to raise up a new prophet …

Episode V – A SAVIOR IS BORN

For many generations the Israelites were slaves to Pharaoh in Egypt. Then Moses, the son of a slave who was raised as a prince, returned from exile at the command of the Creator to lead the captive Israelites to freedom and to the promised land. On Mt. Sinai, the Lord gave Moses and His people the Law so that they will once again trust in God’s mercy and believe in the one true God for salvation. The Lord also reminded his people of the promised seed of Eve that would one day defeat Satan. He told His people to live in the land, obey the law, and to wait faithfully for the coming of the Messiah. Over time, sin once again corrupted the people, leading them to kill the Lord’s prophets and engage in idolatry and spiritual adultery. At the proper time, the Word became flesh and the Lord fulfilled the promise by sending His only son, Jesus the Christ to be the Savior of the World. But although His creation did not recognize Him as Lord, nevertheless Jesus humbled Himself and died on the cross for the salvation of the world. All who will believe in Jesus Christ will be saved …

Episode VI – THE RETURN OF GRACE

After Israel rejected, betrayed, and crucified her savior, the Lord offered the gracious gift of eternal life freely to the nations of the earth. The church was born. Jesus called and commanded His disciples to go into all the world and make disciples of all the nations, to live peaceably among men, to encourage one another to good deeds and selfless service, and ultimately to be united with a common love for each other and for all men. The Lord is showing the world His Son through the church. There will come a time when the world will once again reach a point of ultimate rejection of the Lord, and He will call His church to the heavenly realm and then judge the sinful world for their rebellious ways. Through this great tribulation, He will graciously save a remnant of Israel and fulfill His promise to King David.

After the great battle at the end of the tribulation, Jesus Christ will return to rightfully reign on David’s throne in Jerusalem. Satan will be thrown into the abysmal prison and there will be peace for a thousand years. After that, Satan will be released for a time and make his last stand against his creator. Jesus will defeat Satan and his army and cast them all into the lake of fire. The Creator will fulfill his promise in the garden of Eden, and the seed of the woman, the God-incarnate Jesus Christ, will create a New Heaven and a New Earth for those who have believed in His name. God has never changed, He has always graciously offered mercy and salvation and freedom from sin to those who trust in Him. God loves to be trusted.